The Nederland Bulldogs could stand alone as the second-place team in Disitrict 21-5A with a win over Crosby Friday. Both teams boast a 4-1 district record with their only losses coming from Beaumont United.

Nederland has won with a smothering defense and dominant paint play by Tripp Parker, who scored a game-high 26 points in a 62-41 win over Memorial Tuesday. Parker scored 14 points in the third quarter as the Bulldogs outscored the Titans 22-9 for the period. 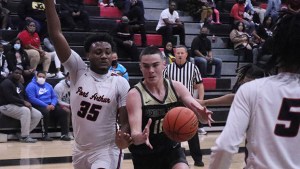 After the game, Nederland Head Coach Brian English called Parker a “throwback from 1975.”

“He is from Port Arthur and he is a tough kid,” English said. “He just plays tough. He is very confident. Sometimes it is ugly, but we will take it… He ain’t a high riser. He is just a basketball player and he goes and gets it done.”