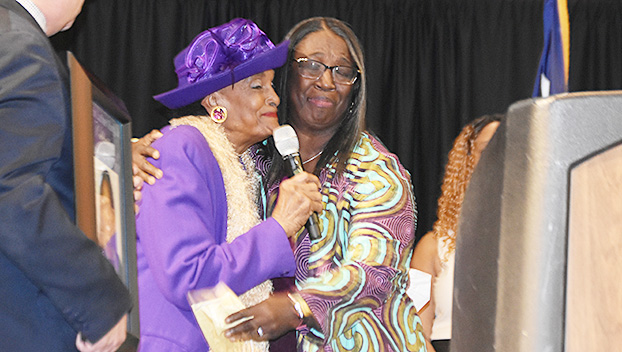 Yolanda Avery, right, gives a hug to Nora Nisby after Avery was named Woman of the Year. (Mary Meaux/The News)

Earlier this week I had the privilege of covering the 36th Annual Martin Luther King Jr. I Have A Dream Celebration and Brunch and enjoyed every minute of it.

Hargie Faye Savoy, matriarch of the MLK Support Group that, years ago, was personally asked by Coretta Scott King to create the group. She may not have been there in person but was just a phone call away.

Mistress and Master of Ceremonies Jackie Simien and Angel San Juan dialed up Savoy and put her on speaker for the crowd of approximately 400 to hear. She thanked chairperson Terry Savoy Hadley and those who made the event possible.

Savoy, who recently celebrated her 92nd birthday, told the attendees that when they leave the Bob Bowers Civic Center at the conclusion of the event, there is still work to be done. And this was not a day off but a day on.

That sentiment — there is still work to be done — was echoed during the hours-long celebration.

It is sad to think today, 159 years after President Abraham Lincoln signed the Emancipation Proclamation that people of color are still striving and fighting for equality and equity.

I was on hand to see Dr. Levy Barnes and Yolanda Avery named the Man and Woman of the Year and smiled as Barnes’ name was announced. His wife, Sheri, jumped up in excitement and shouted “that’s my husband.”

Then there was excitement when Avery’s name was announced and the obviously shocked and excited woman walked to the podium.

I listened to the speeches and words of wisdom from the Rev. Kalan Gardner and the Rev. Donald Frank. I watched as praise dancer Christian Manuel performed to the song Mention by FreshStart Worship. Her performance was powerful and I felt her emotions as she moved with the music.

Houston area violinist Kiana Smith performed Lift Every Voice and Sing while the audience stood and mouthed the words.

But what does all of this mean to me and how can I make a difference? I treat others with respect, and being old school, I still say ‘yes sir’ and ‘yes ma’am.’

But those are just manners. I need to do more. I will speak out against injustice and do what I can to make a difference.

And, as a reporter, I will tell the stories of people of all colors of the rainbow. Shine a light on others, cheer them on in their successes and be there in their times of need.

I guess I hadn’t really thought of the big picture but I believe a higher power led me to this job/career and I am able to share the words of others and, hopefully, make a difference.