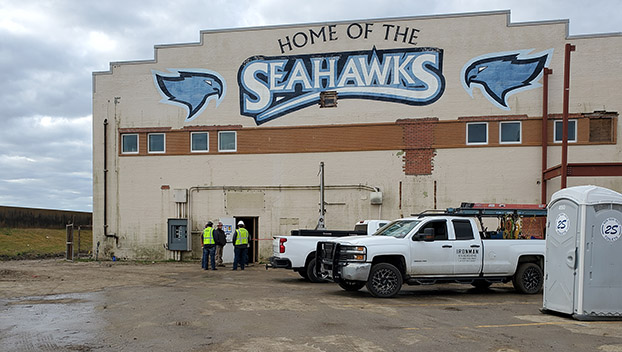 A tugboat passing in the ship channel Tuesday likely saved a building on Lamar State College Port Arthur’s campus from major damage when a crewmember reported an early morning fire.

The former armory building, which is undergoing a major transformation to turn it into a training area for crafts, had damage in a mechanical mezzanine where there are exhaust fans for the welding area. Some damage can be seen on the backside of the building nearest the seawall and the ship channel. Plastic sheets hung down from several windows where louvers will later be installed.

Gerry Dickert, public information coordinator at LSCPA, said work would continue on the north side of the building, where a new wing is being constructed. 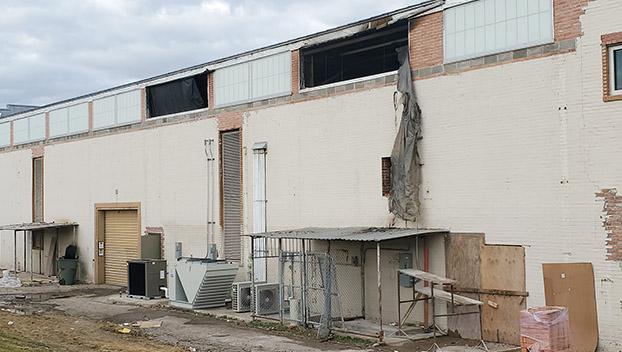 Melted plastic hangs from a window at the back of the building from Tuesday’s fire. (Mary Meaux/The News)

Port Arthur Deputy Fire Marshal Antonio Mitchell said the call came in between 4 and 4:30 a.m. Tuesday from someone on a tugboat. The call was originally dispatched to the Carl Parker Center several blocks away on the LSCPA campus and when responding firefighters realized that was the wrong building, they began to check other buildings along Fourth Street.

One of the PAFD crews found the correct building, where light smoke and fire were visible.

“This is only preliminary. My team and I went out (Tuesday) morning and it appears some welding equipment may have started the fire. The guy (a worker) left last night around 4 p.m. and he was doing some welding in that same area,” Mitchell said while stressing again this is only preliminary information. “It doesn’t appear to be anything malicious.”

Mitchell said the building was secure when they arrived, quashing the idea that someone may have entered and made a fire to keep warm.

The building doesn’t have “true power” connected to it, but there is a breaker box allowing workers to use extension cords. 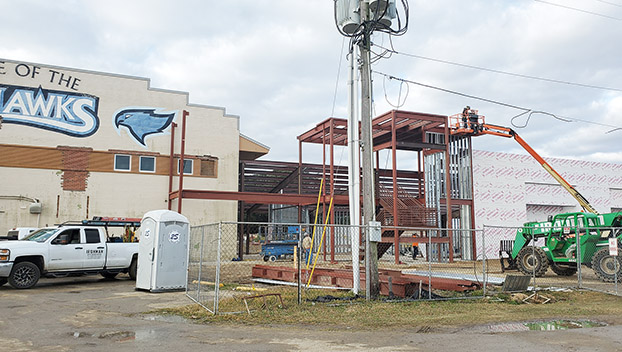 Work continues on the new wing of the building while work is temporarily halted on the old portion. (Mary Meaux/The News)

H.B. Neild, an industrial construction and project management company, is working on the project for the college.

At this time, no one is to enter the old armory building, according to college officials.

Mitchell said PAFD is working on a report on the fire and would try to get the paperwork done in two business days. The report will feature details backed by science, he said.

Damage to the structure appears moderate with smoke throughout the building. Mitchell was told the wooden roof is more than 90 years old. This part of the building only had soot and smoke damage but nothing penetrated the roof, which appears study and intact.

Because the building is a state building, Mitchell called the State Fire Marshal’s Office.

Dickert offered thanks to those who helped.

“We appreciate the help for the Port Arthur Fire Department and especially the tugboat captain that called in the fire,” he said. “That potentially saved a lot of damage because the roof of that structure is wooden. If the fire had gotten there, it could have potentially destroyed the building. They were concerned and conscientious enough to call. That’s huge in this situation.”

The building is being renovated and a new wing added to accommodate training for various crafts that will work inside local industry.