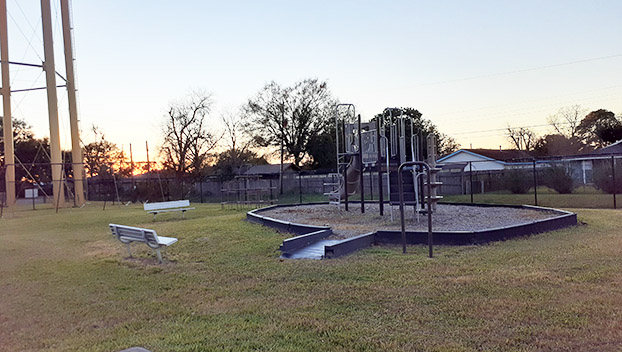 The parks staff will remove the equipment, and the solid waste department will haul it off. The city anticipates moving forward with the purchase of new equipment no later then March.

There are three play features currently at the park located next to a city water tower, City Manager Chris Duque said.

“There is a playground we bought in 2012 or 2013, then there is that metal climber thing and there is a swing set,” Duque said at Monday evening’s city council meeting.

“The playground is still in good condition, so that will stay. And we budgeted to replace the other two things.”

Duque said the city will receive mockups for the new equipment this week, adding staff members have already reviewed concepts for the park.

“Then, I think at that point, we are just at the mercy of the delivery time table for everything,” Duque told councilmembers.

Mayor Pro Tem Talmadge Austin asked if the park would remain open to the public during the equipment transition and was told, “yes.”

Improvements to South 5th Street Park are just part of a citywide plan for upgrades this year,

According to the Nederland parks department, the following events are scheduled in 2022: