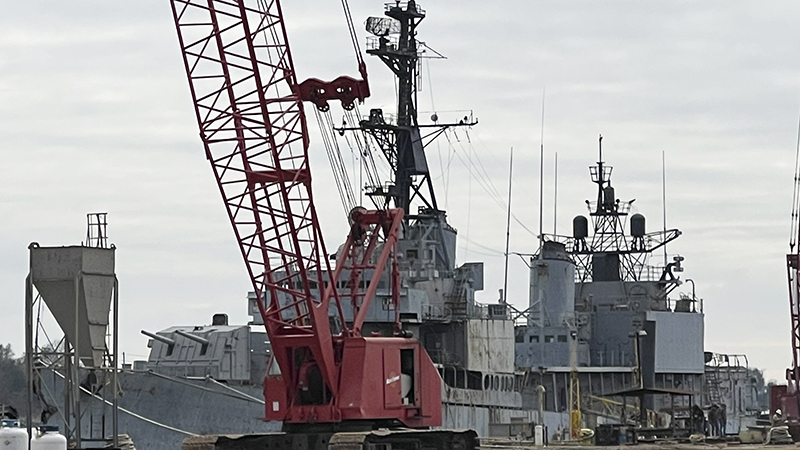 At the end of Proctor Street, sitting quietly in still waters behind the structures at Gulf Cropper, is “just a bunch of steel.”

But it’s one that tells of multiple wars, hundreds of veterans who fought from her deck, and the son of an immigrant who died protecting the soldiers and ship he loved.

The USS Orleck Naval Museum arrived two days ago after leaving Lake Charles, Louisiana, with hopes of soon making it to Florida’s Jacksonville Naval Museum. Commissioned in 1945, the Orleck — a ship built in Orange for approximately 10 years of use — spent a total of 53 years in service. And all in the name of a man who died two years before he could see his name on the side.

Joe Orleck was the son of a Russian immigrant who arrived in 1904.

“They were very poor and did scrap metal and just tried to get by,” said Bob Orleck, Joe’s nephew. “I always say no where else but in the United States could the son of a Russian immigrant get such an honor — having this mighty destroyer named for him.”

Joe was only about 17 when he joined the U.S. Navy, where he served for decades.

“He was a boxing champion in the Navy,” Bob said. “He was one of those kind of guys that was destined to do heroic things and he did. He saved a lot of lives. He was worthy.”

At the age of 37, Joe was aboard the USS Nauset in the Gulf of Salerno, when it was bombed during WWII. He and his first mate saved all the men they could, then went back aboard to move the vessel so it could be towed and salvaged. 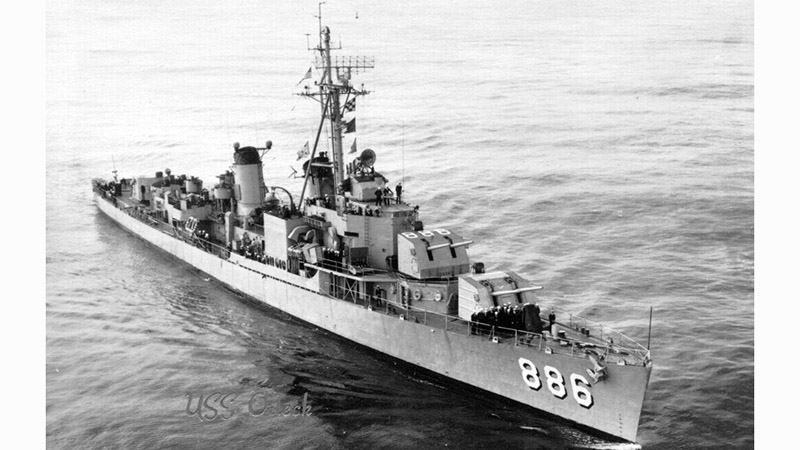 A photo of the USS Orleck before it underwent fleet rehabilitation and modernization in 1962. (Courtesy of Bob Orleck)

But it’s something his mother never knew.

She had been ill, Bob said, so they family told her that her son was on a special mission overseas. They sent her letters and gifts from him. And she died believing he was still alive.

Two years after his death, at the end of WWII, a new destroyer was created and named after Orleck.

“It’s a wonderful ship,” the nephew of its namesake. “She’s saved many lives of servicemen. She, as a result, got four battle stars in Korea and 14 in Vietnam. She’s the most decorated war ship since WWII.”

But the reason for her stars isn’t because of her time in the water.

“The one thing I think about a ship is it’s just a bunch of steel,” Bob said. “But the men that serve on her were her blood and made her the ship she is. The men who served on her were wonderful men.”

Bob has hosted reunions all over the country for those who served aboard the ship.

“These ships were not really easy to live on,” he said. “And yet you talk to these men that served aboard and they’ll say it was some of the best times of their lives when they served. I more represent the men from the ship than the ship itself.”

Efforts to move the ship to Jacksonville, Florida, have been ongoing since 2019.

If it reaches its destination, it will join the only other Naval ship from the Vietnam war. The rest have been decommissioned and scrapped.

Her wear and tear is visible, but not necessarily permanent.

“She languished in this country for 21 years without having the proper care and maintenance,” Bob said. “She’s not very pretty, but she can be made pretty.”