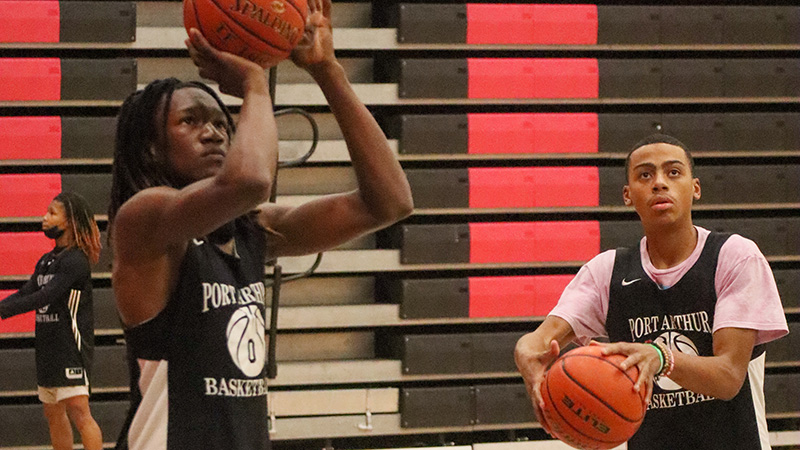 Despite the slow start to the season, the Memorial Titans boys basketball team sees improvement as district play nears.

As of Tuesday afternoon, the Titans were 3-7 coming off a tournament in Houston.

Junior forward Ke’Andre Jones said the team has to follow game plans better in order to be successful.

“I feel like we are really coming together and playing more as a team,” Jones said. “We were having trouble following coach’s game plan. When we do follow it, we come out with a win.”

Jones has led the team this year, coach Alden Lewis said. Jones that he worked diligently on his jump shot and finishing with his left hand during the offseason. He said the game has slowed down for him after playing varsity as a sophomore last year.

Lewis said the team is taking it a step at a time.

“We are trying to get complete games,” he said. “We are aiming for district, trying to get guys on the same page and execute like we know we should be.”

The Titans welcomed the return of football players who joined the team three weeks ago. Point guard Jah’mar Sanders is recovering from a knee injury suffered in the Titans’ playoff game. Lewis said he expects Sanders to be ready near the start of district competition.

Adrian Hayward and Ilijah Williams also joined the team after the football season.

While Lewis gets the team on track, the coach said the Titans are leaning on Jones.

“He is our leader right now,” he said. “Hopefully he continues to elevate his game. He is so versatile. He is a long, wiry, athletic kid that can play multiple positions. He is an all-around player.”

Lewis said point guard Maurion Edwards has also been a key contributor to the team.

Lewis said he has been pleased with the team’s defense as of late.

“Even though the record may not tell it, we have been defending pretty well,” Lewis said. “We have held teams to low scores to where we have an opportunity to win. We are getting kids to buy into that as a staple and we will be alright by the time district comes.”

The Titans will also host the Gamble Classic later this month. The tournament is scheduled to tipoff Dec. 28.