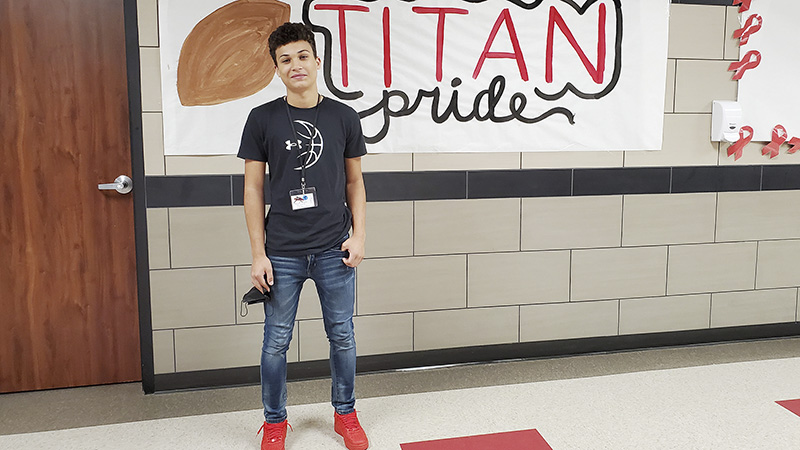 One of his teachers, Sharon Session-Thomas, called him a phenomenal student.

“He has many irons in the fire as he is a son, a brother, friend, an athlete and an honor roll student; yet, he maintains his position well in them all,” said Session-Thomas, who primarily teaches English I. “He has amazing goals for his future, and I am proud to be just one of the people placed in his life to help him get there. Ayden is a leader and a scholar in the making.”

This is his first year in Port Arthur ISD, previously attending school in Nederland. Coming into a new district in a new city, he wasn’t quite sure what to expect. However, now almost halfway through his first year, he is confident in the education he’s receiving.

Since arriving he has been settling in easy and enjoying the school.

The busy student plays on the freshman football team and runs track.

And when he’s not in school or doing homework, he spends time like a typical teenager.

Garrett likes to hang out with his friends. And he’s also a fan of video games such as Call of Duty and Madden.

When it comes to academics, his favorite subject is algebra.

“When I was little, me and my dad would do algebra. I do it in my head. I don’t like using the calculator. I’d rather use paper,” Garrett said.

He also has an interest in environmental issues, such as helping keep the community clean.

Garrett would like to go to Harvard after he graduates high school and has been talking with his parents about majors and potential career paths.

Ayden Garrett is the son of Stacie Benham and Ivan Benham.