MARY MEAUX — Port Arthur’s pro sports heroes give back; don’t forget where they came from 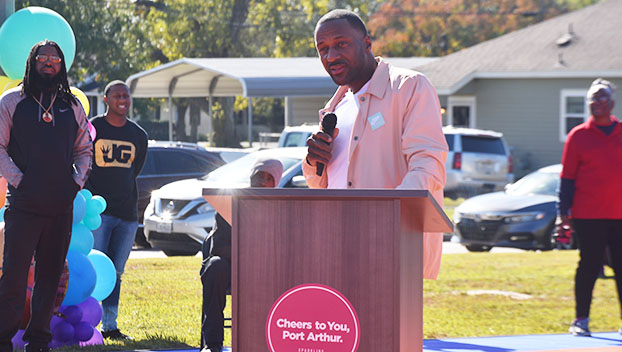 Jordan Babineaux speaks to the crowd.

Last Saturday I had the chance to watch Port Arthur native and former NFL player Jordan Babineaux speak at a ceremony unveiling the new basketball court at Bryan Park, known among locals at the “503” park.

The court, complete with new equipment, is courtesy of Sparking Ice’s Cheers to You Beautification Project.

Babineaux’s wife, who is employed with the Sparking Ice’s marketing group, nominated the city for the Cheers to You Project. Port Arthur was one of three chosen this year. Next year, swings, picnic tables and benches will be installed.

Cheers to You is a series of town beautification projects created to spark some sparkle and cheer during difficult times and bring communities together, according to the company’s website.

Port Arthur’s plight with past hurricanes is the reason for the help.

But let’s get back to Jordan and the topic of giving back to the city.

It’s become obvious that Port Arthur has produced many professional athletes, but the twist is they come back to the city that helped carve their future and give back in some form or fashion.

Jordan and his brother Jonathan Babineaux, both former NFL players, have a foundation, which gives back to others.

I found a story I wrote back in November 2010 where I was at Sacred Heart-St. Mary Catholic Church parish hall during a giveaway. Representatives of their families were there to distribute 200 meals, including turkeys to needy families.

The men were busy in their NFL careers at the time and obviously couldn’t be there in person, but Ranyasha Roberts, Jamaal’s cousin, summed it up.

“We are blessed, both families, with the opportunity to come back and help people in Port Arthur,” she said in the Nov. 23, 2010, article.

Port Arthur native and New England Patriots linebacker Elandon Roberts is also on the list of giving back. And he’s currently investing in his hometown in a partnership with businessmen in Spindletop Concrete Inc., a new business located in Port Arthur.

These local, big name football players have come back to town and hosted camps for kids and likely have done way more than we know.

And these are a few of the names. There are others who have given back and continue to give back. They have helped in the aftermath of hurricanes and much more.

They haven’t forgotten where they came from and for that, we’re grateful.