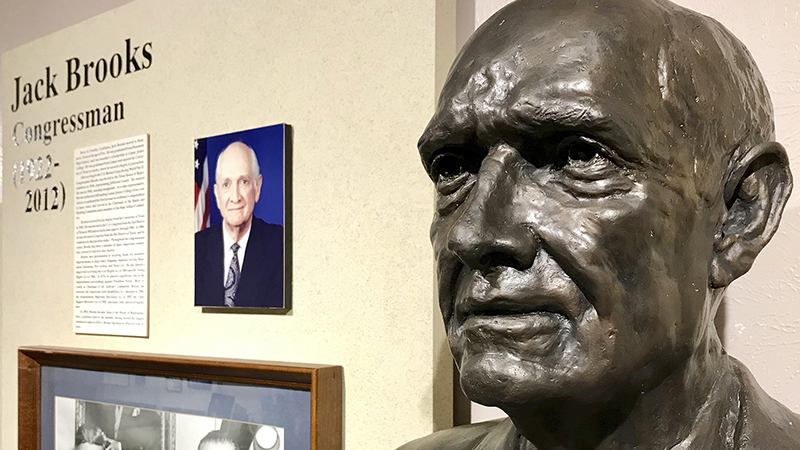 A bust of Jack Brooks sits with an exhibit dedicated to him at the Museum of the Gulf Coast. (Ken Stickney/The News file photo)

The Dolph Briscoe Center for American History at The University of Texas is pleased to announce the launch of the Jack Brooks Digital Legacy Project.

The project website explores the life and public service of Congressman Jack Brooks through a digital repository of newly digitized primary source materials from the Jack Brooks Papers.

Brooks was a key legislative decision maker during the Cold War, the space race, the Watergate scandal and the Iran-Contra affair.

“Jack Brooks was an influential figure during most of his years in Congress. His extensive collection of papers are a cornerstone of the center’s congressional and political collections,” said Don Carleton, executive director of the Briscoe Center.

“This new site illustrates his many contributions to Texas and the United States through carefully selected primary source materials. Now, this evidence of Brooks’ legacy of public service is easily accessible to historians, researchers and the general public. We’re grateful to the Jack Brooks Foundation for their support of this significant project.”

While the Jack Brooks Digital Legacy Project contains only a portion of the 860 linear feet of archival holdings in the Jack Brooks Papers, each item featured on the site was carefully selected by the project staff to fully represent his life and career.

The site contains more than 1,600 documents (adding up to more than 3,600 pages), dozens of still photographs and multimedia materials.

The Jack Brooks Digital Legacy Project was supported in part by the Jack Brooks Foundation, a nonprofit organization that develops independent and nonpartisan activities designed to empower, educate and motivate individual Americans to participate in the voting process.

“The Brooks Family would like to thank the Briscoe Center for bringing these important documents to the public,” said Jeb Brooks, chairman of the board for the Jack Brooks Foundation.

“Jack Brooks, my father, crafted legislation that helps govern our country even to this day. Now everyone will have access to examples of the positive things government can achieve when representatives of goodwill work together.”

Learn more by visiting briscoecenter.org and searching for “Jack Brooks.”