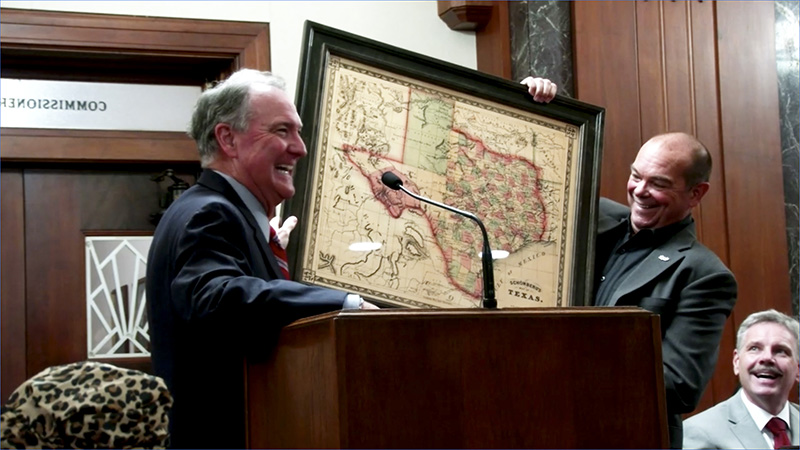 Judge John Stevens, left, shows a framed replica of a vintage Schonberg Texas map that he gifted to the county this week. (Screenshot)

BEAUMONT — Jefferson County received a unique gift last week that highlights the history of Texas and brings forth a unique fact about Port Arthur.

District Judge John Stevens on Nov. 9 presented commissioners with a vintage map of Texas recreated from a painting by Austrian-born composer and artist Arnold Schoenberg. 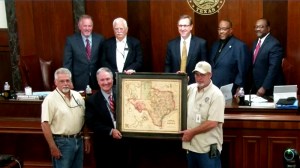 Commissioners stand with Judge John Stevens after accepting a map of Texas as it was in 1866. (Screenshot)

The map depicts the original road that traveled from El Paso through Beaumont, now known as U.S. 90.

“Also it shows the City of Port Arthur, which was originally named Aurora,” Stevens staid. “It is shown as Aurora.”

Aurora was established in the 1840s by travelers hoping to use Sabine Lake for trade, according to information from the Port Arthur Convention and Visitors Bureau. They purchased lots it the area that is now Downtown Port Arthur, but ultimately abandoned the area.

In 1895, Arthur Stillwell, who founded the now-named Kansas City Southern Railroad, initiated the creation of Port Arthur as a hub for railways that could move trade. But the city’s credit mainly goes to Stillwell’s friend John Gates, who was invited to invest in the area.

“This map is special because it represents a change for the better,” said Stevens. “A change to represent the ideals expressed in the Declaration of Independence — that all Americans truly are equal and we all have a vested interest in those ideals.”

“We appreciate it,” he said, adding the commissioners together would make recommendations on where in the courthouse it should hang.

“This is truly a wonderful gift — a special gift — that we all together are happy to donate to Jefferson County and to remind us how we’re always striving to do better toward reaching those ideals.”