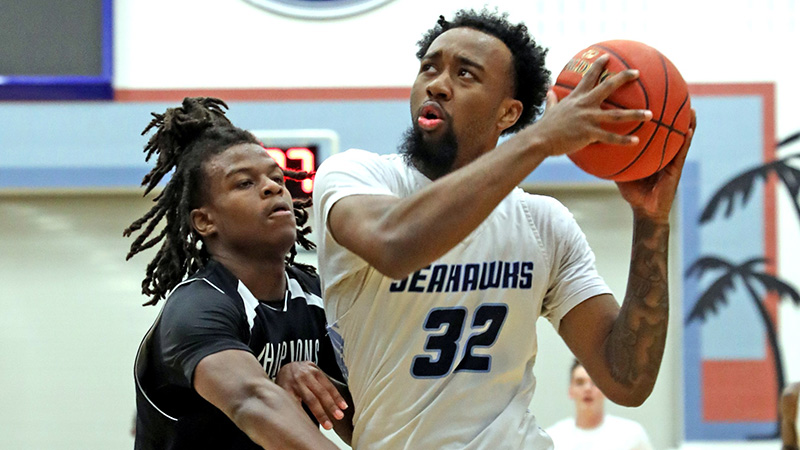 Myron Washington Jr., right, ranks No. 1 in the nation in NJCAA Division I basketball with 28 blocked shots, averaging 9.3 blocks a game, also the top mark in the country.

Ask Myron Washington Jr. a question or two and you’ll realize he is truly a man of few words. He pretty much lets his actions speak on his behalf.

Washington made a huge statement about what to expect from him in the coming months after setting a new school record with 15 blocked shots in a single game.

“There’s not anything special that I do,” Washington said, shrugging his shoulders. “I jump at the backboard. I try to be fast. I guess it’s just good reflexes.”

Those reflexes has Washington, a 6-foot-9 sophomore from Monroe, Louisiana ranked No. 1 in the nation in NJCAA Division I basketball with 28 blocked shots, averaging 9.3 blocks a game, also the top mark in the country. The No. 2 shot-blocker in the country has 17.

Washington and the Seahawks continue their season this weekend with an appearance at the East-West Challenge in Plano.

Both games will stream live with video at the college’s athletics website, www.LamarStateSeahawks.com.

“His anticipation of the play is uncanny,” Head Coach Lance Madison said of Washington. “He’s quick to the ball and he’s completely focused on stopping the other team from scoring.”

Washington started playing basketball in the YMCA recreational league as a boy and stuck with the sport as he started public school.

It was in sixth grade that his interest in basketball was matched with the physical stature to be a real force on the court.

His improvement continued through his days at Ouachita Parish High School where he led the Lions to a 32-11 overall record his senior season.

Showing just how versatile he is on the court, Washington averaged 15.5 points per game, shooting 68.2 percent from the floor, while pulling down 8.6 rebounds per game.

Out of high school, he was heavily recruited and decided to spend his freshman collegiate season at Dodge City Community College in Kansas.

In his one season there, he made a huge impression, leaving his name on the school record book as the all-time No. 4-ranked shot-blocker with 54 and as the No. 9 career shot-blocker for the Conquistadors.

With his additional year of eligibility thanks to the COVID-19 season in 2020-21, Washington has already impressed as a Seahawk.

His 15-block effort against LSU-Eunice on November 6 breaks a seven-year-old record set by Anthony Allen in 2014. Allen has been the Seahawks player to beat since he established the bar for shot-block records in both his freshman and sophomore seasons at LSCPA.

And while his shot-block talents might overshadow his complete-player contributions on the floor, it would be hard to ignore Washington’s scoring and rebounding abilities.

In the LSU-E game, he collected his first double-double of the year with 10 rebounds to go with his 15 blocks. He has twice scored in double-figures this season, averaging 7.3 points a game in the paint.

“We haven’t even seen the best of Myron yet,” Madison said. “He’s going to continue to be more and more dominating as the season goes along.”