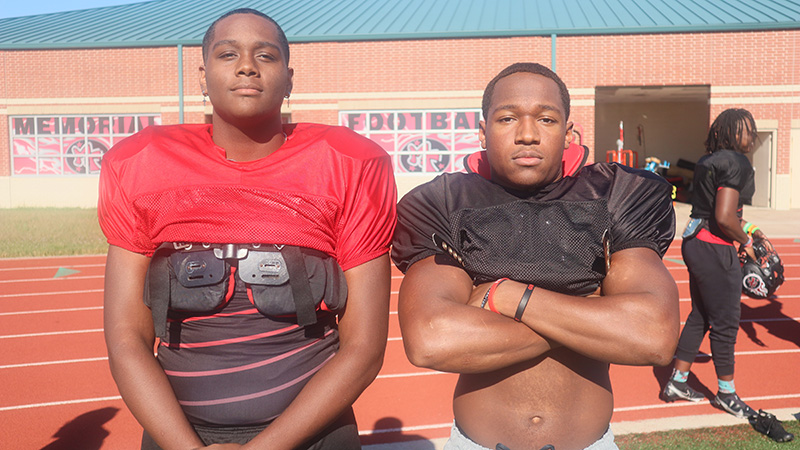 To be on the Memorial Titans football team, players have to process a lot of information at a high rate of speed.

Titans linebacker Jayden Fisher and lineman David Wells represent that mentality as Wilson Early College students. Both said they want to make sure their futures after the final whistle are in good hands.

Every day, the two players travel across town for classes and then to Memorial High School for football practice.

Wells said he feels a sense of accomplishment by playing varsity football and attending early college.

“No one really understands what it takes,” he said. “The class is not easy, but if you actually put the effort into doing it, it is not that hard. The only thing that is really a problem is the timing. Going from over here to the Seawall to back over here by the mall can be tough.”

That toughness is a defining characteristic for the Titans. Wells also has high expectations from his family. His sister was salutatorian.

“My sister was a straight-A student,” he said. “I’m not held up to that standard, but it sets the bar high. I try to be on it as much as I can.”

Wells wants to graduate high school with his associate’s degree, which is one of the perks of the early college program.

“I also want to graduate with at least one official offer (to play college football),” he said. “I want to go to college like my sister did. Since my parents didn’t finish it, I want to be the male in my family to go to college.”

Wells said he would like to be a marine biologist or an engineer.

Fisher was always into sports and added his mom pushed him to dedicate as much time, if not more, to academics.

“She forced it into me,” he said. “She made sure that if my grades weren’t right, I wasn’t playing any type of sports. They would not allow any C’s. Growing up, I was all A’s and B’s. I have been slipping a little lately. Math is my best subject. I don’t really like it that much, but I have always been good at it.”

Fisher said he really noticed the difference with math in high school when he didn’t struggle with certain subjects that other students found difficult.

“Algebra 2 was really easy for me,” he said. “Right now, I really like Lifespan and Human Development.”

The linebacker said he wants to go to college to be an engineer.

“I haven’t decided yet if it is going to be a chemical or mechanical,” he said.

Fisher said he hasn’t really struggled balancing school and sports but admitted he has to stop and focus on school sometimes.

“I focus on sports too much sometimes,” he said. “I get to slacking on the grades. I’ll see my grades and know I have to focus in.”

Memorial Head Coach Brian Morgan said the football program has been fortunate to have players that can handle the demands of playing varsity and a heavy academic load.

“It has been a benefit for the guys that are academically advanced and can get that done. They can finish with a two-year degree,” Morgan said. “We just want to try and give our guys options. Obviously, football in Port Arthur is a really big deal if you want to play football in college, but we want to give them something on the academic side, too. Some of our athletes are taking advantage of that.”