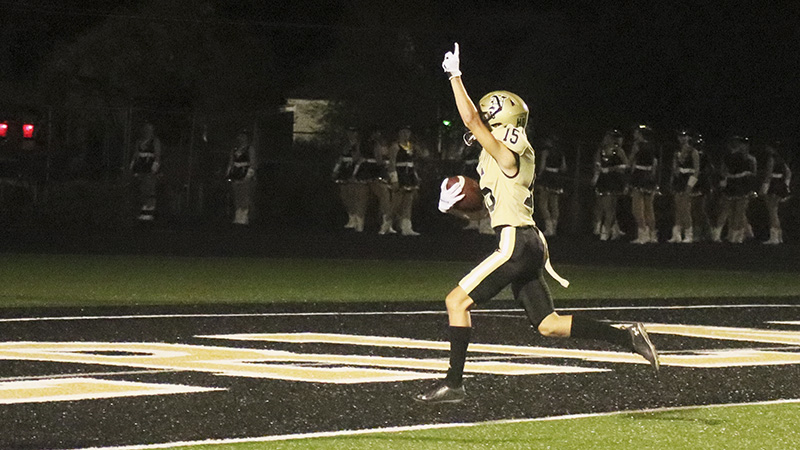 DAYTON — The Nederland Bulldogs turned five Dayton turnovers into points while posting a decisive 41 to 14 victory over the host Broncos.

Taking the opening kickoff, the Broncos’ district-leading passer Blayne Denton was picked off on the first offensive play by Bulldogs safety Nolan White.

Nederland drove quickly down the field and scored on a 2-yard run by Kyndon Fuselier. Carter Piletere’s PAT made the score 7 to 0 ith 9:12 left in the first quarter. The Broncos turned the ball over on downs at mid-field. Nederland’s drive stalled and Piletere kicked a 34 yard FG to increase Nederland’s lead to 10.

After the teams exchanged punts, the Broncos’ Daveon Washington started getting good yardage up the middle. Camron Cooper scored from 8 yards out early in the second quarter. Gustavo Orozco’s PAT made the score 10 to 7.

The Bulldogs took the ensuing kickoff and drove into Bronco territory. When the drive stalled, Piletere’s 41-yard field goal attempt was short. Dayton punted the ball back to the Bulldogs. Kyndon Fuselier’s reception put his team into field goal range.

This time, Piletere converted a 31-yard attempt to make the score 13 – 7. The teams exchanged punts and Dayton crossed mid-field before running out of timeouts. As time expired, a heave from Blayne Denton was again intercepted by Nolan White.

Nederland fumbled the second half kickoff and Dayton recovered at the Bulldog 35. The drive was shut off dramatically when Nash Leonard intercepted Denton’s pass to Garner.

The Bulldogs drove down the field and increased their lead on a 2 yard run by Luke Broussard. Piletere’s PAT increased the lead to 20 to 7. On the next possession, Denton was unable to make connections with his receivers and the Broncos punted. After a long run by Kyndon Fuselier, Mason Beresford scored from 3 yards out. Adding the PAT, Piletre made the score 27 – 7.

The Broncos mounted a sustained drive to start the fourth quarter. Denton tossed an 11 yard pass to Garner to cut the lead to 27 to 14. Nederland scored two late touchdowns – another 1 yard scamper from Broussard and a 28 yard run from Ethan Fobbs to end to scoring.

Nash Leonard intercepted Denton early in the third quarter to turn back a Broncos threat after a Bulldog muffed kickoff.