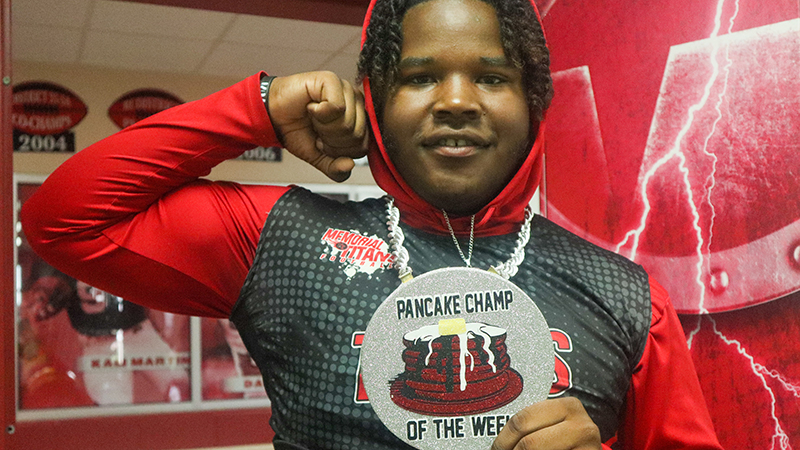 For the Memorial Titans, the most coveted recognition is not who scored the most touchdowns the previous week. It is not who laid the biggest hit on defense. The most sought-after acknowledgement is a silver chain with a picture of a stack of pancakes that reads Pancake of the Week.

A pancake is a football term meaning to block someone to the ground. The play largely goes unnoticed to the casual observer, who just watches the ball, but the chain has quickly become the topic of debate when it is handed out.

“When we give it out on Mondays, there are a lot of people mad that they didn’t get it,” Morgan said. “On Twitter after the game, all of our players are tagging coaches. It is wanted. It is wanted by defensive guys. Guys on special teams want it.” 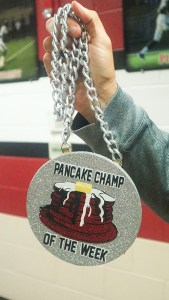 The chain came from former offensive lineman Tre’Vonte Caines and his father.

Last week, receiver Ilijah “Lala” Williams won the chain. Offensive lineman Roshawn Calhoun took exception to what he considered a miscarriage of justice, according to Morgan.

“It is for the guy that we feel played most physical and played really well,” he said. “There is always some banter about who should win the award and who shouldn’t. It is a fun award and those guys take pride in blocking.”

Morgan said that even defensive end Christian Thomas has said he wants the award. Thomas comes in a tight end some times for the Titans.

The coach said he has been pleased with the blocking by his receivers. The Titans throw a lot of screens, which require receivers to block. He also said they do a good job of blocking down field when quarterback Jah’mar Sanders tucks and runs.

Morgan said the players are allowed to wear the chain where they like, but have to return it Monday for it to be handed over to the next player. However, Calhoun said he does not have plans on giving it up soon.

He said he earned the chain this week on one of Sanders’ long touchdown runs against Galveston Ball.

“It was a pull play and the safety came down and tried to blitz,” Calhoun said. “I gave it to him… I feel like I should’ve won it against Lancaster when I threw No. 7 on his head. This was my first time winning it and I am going to get it again next week.”

The Titans will host Beaumont United at Memorial Stadium. Kickoff is set for 7 p.m. Friday.