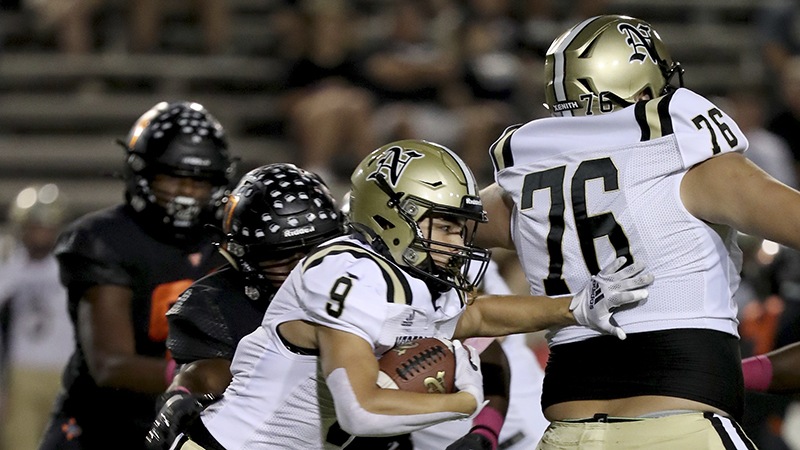 Nederland’s Mason Beresford scrambles away from the Texas City defense on a carry in the first quarter Friday, Oct. 8, 2021, at Stingaree Stadium in Texas City.

TEXAS CITY — The Texas City Stingarees locked up the Nederland Bulldogs and threw away the key.

Led by two-way athlete Donovin Carraway, who had three interceptions, the Stings came away on top by the final score of 14-2 Friday night at Texas City ISD Stadium.

The Texas City defense was in the backfield all night, forcing 16 negative yardage plays, seven sacks and four total interceptions.

The Bulldogs were held to minus-five total rushing yards, but passed for 148 through the air, 105 of which were hauled in by one receiver.

Setting up the Stings for the game’s first score was Carraway, who picked off a pass and returned it to the Texas City 45-yard line, putting the offense up in good field position.

Ten plays later, Texas City got on the board first via a pass by Stings starting quarterback Jacob Duran to athlete Donovan Avery for an 8-yard touchdown with 2:22 remaining in the first quarter.

Nederland moved down field on a long 13-play drive but were halted by Avery as he picked off another Nederland pass, but instead of taking a knee, he took the ball out of the end zone and got tackled at the 2-yard line.

This would be troublesome as the Nederland defense forced an intentional grounding call in the end zone, resulting in a safety and cutting the Stings’ lead to five, 7-2, with 6:11 left in the second quarter.

Right before half, the strong Texas City defense forced Nederland to punt out of its own end zone and as a result picked up great field position at the Nederland 31-yard line, with 23.9 seconds remaining.

Using all of their timeouts, Texas City was able to score four plays later in similar fashion as Duran found Avery again, this time on a highlight real catch, where the ball went through the arms of not one, but two, Nederland defenders, landing into the hands of Avery for a 17-yard score.

Holding Nederland to just 77 yards in the first half, the Stings walked into halftime with a 14-2 lead.

The best scoring chance the Bulldogs had all game came midway through the third quarter, but senior Basil Wilson forced a turnover-on-downs at the 7-yard line when he dropped Nederland quarterback Luke Broussard for a sack.

Midway through the fourth quarter another Nederland drive was stopped after back-to-back sacks by junior Evan Tullos and Syzon Scott.

In fitting fashion the game ended on Carraway’s third interception.

— Written by BRIAN MOUSER of the Galveston Daily News