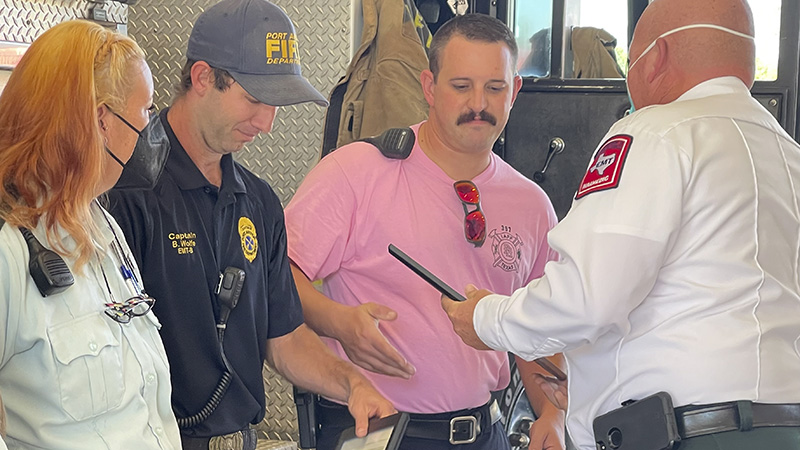 The unity between the Port Arthur Fire Department and Acadian Ambulance Services was a true lifesaver this summer when an Acadian dispatcher helped a man perform CPR on his elderly mother until firefighters and paramedics arrived.

On arrival July 9, the patient was found to be in a state of ventricular fibrillation, which is a dangerous and often fatal heart rhythm.

However, said Acadian QI Coordinator Cal Bynum, firefighters and medics were able to defibrillate the patient, obtain an airway, successfully resuscitate her and bring her to a nearby hospital, where she was later discharged with no neurological deficits. 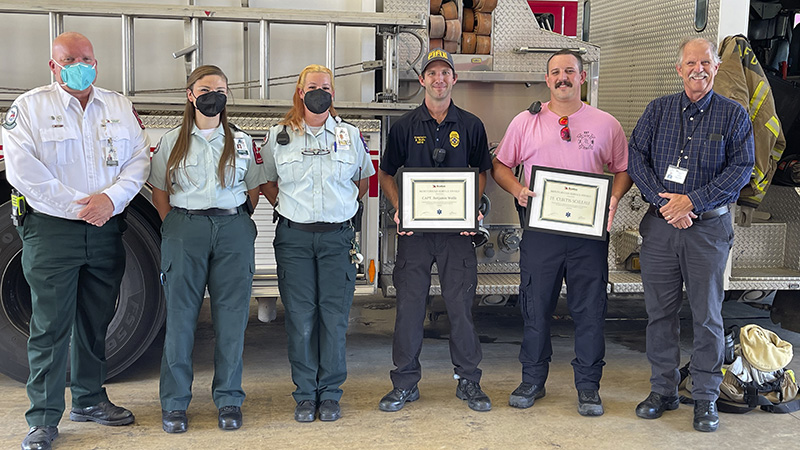 “I would like to thank you for taking this opportunity to recognize the value of the partnership between Acadian and Port Arthur Fire Department, and how that has a positive outcome in our community,” Port Arthur Fire Chief Greg Benson told Bynum during the awards presentation.

“Everybody doing their jobs at the highest level will increase the chances of a positive outcome.”

Isaacks was not able to make the ceremony but was recognized for exercising her training and maintaining control as she talked the man through CPR.

All 911 calls go to central dispatch, Burleigh said, but are diverted to Acadian when deemed a medical emergency.

“The dispatcher was giving pre-arrival instruction on how to give CPR,” Benson said. “That’s the high level of training that the dispatchers have to have because that call could be for this person that’s 90. The next call could be for one that is 9 days. And that is the commitment both from the technical side and from the professional side, for them to know how to give those instructions.”

Benson is also a certified paramedic, and all Port Arthur Firefighters are certified on some level of EMS — basic, intermediate or paramedic.

Benson again stressed the need to teach those in the community how to perform CPR.

“The sooner somebody can start, according to science and evidence, the higher the survivability rate,” he said.

In addition, as part of advanced medical care training, the PAFD will soon be training with Acadian.