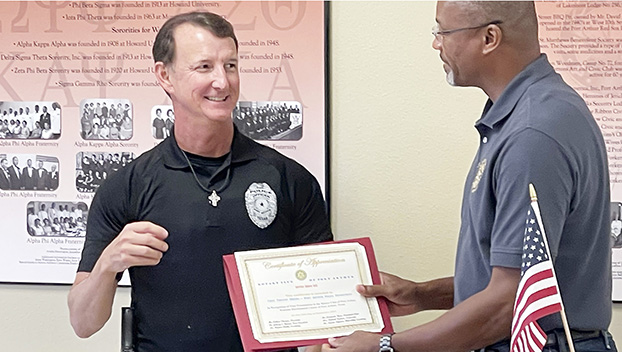 The Port Arthur Police Department is looking for reliable people to help fill out the force.

But sometimes even with the best preparation, new recruits find law enforcement isn’t for them.

Det. Mike Hebert recently told Rotary Club of Port Arthur members of the need and how Chief Tim Duriso has pushed for more officers since he joined the department. When he arrived there was already a deficit in the number of officers.

Hebert said the department has done a great job in recruiting at the Lamar Regional Police Academy. The problem is other departments also look for cadets there.

“I’ll give you a quick example. We got seven cadets out of the police academy several months ago. They passed our process, our testing, physical, mental everything. Got them on the street and within about 6 to 7 weeks we had lost six officers,” Hebert said.

“We certainly don’t look down on those rookies for that because each one of them went into the job — and you have a vision always of the job you’re going in to — the problem is when you get into that job, it can be very different from what you were expecting it to be. This is a very, very difficult job.”

But PAPD leaders would much rather have a person decide the job is not for them then to have an officer fake it through training, get out on the streets and something bad happen.

“Especially if they are not mentally suited for this job,” Hebert said. “We don’t see it a failure. Because of those seven we got one.”

One recent hire could have gone to another area for his career but chose Port Arthur. The officer’s family is in law enforcement in other counties.

This new officer has served two tours in Iraq in heavy combat and one tour of Afghanistan, where his whole tour was destroying poppy fields within Afghanistan. The poppy is actually funneled into the country and is how heroin is made, Hebert said.

The process to hire more officers hasn’t stopped and there are people “in the pipeline” he said, adding it takes time.

From the beginning of the academy it takes about three months to vet a person, then the academy last three to four months. Training can last up to five months.

“So it could be a year before he actually, or she, gets out and on the street in that police car by themselves,” he said, adding it’s a long process.

Hebert, a veteran officer, remembers the feeling of putting on the uniform for the first time and looking in the mirror. He remembers graduating the police academy, his first shift meeting and the first time sitting in that police car and the butterflies thinking “what am I doing?”

Hebert said he can relate to the young officers coming in and he and Sgt. Ahmal Bodden try to council the new officers.

Information on how to become a Port Arthur police officer is available on the city’s website under police department.