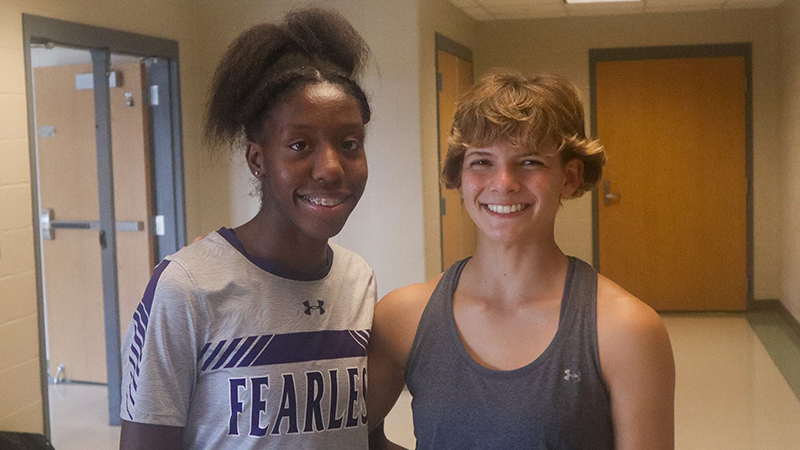 PORT NECHES — Katherine Page and Sanaria Butler have the Port Neches-Groves cross country team in good position as the Indians reach the final leg of their season.

Head Coach Josh Tanner said his team is where it needs to be.

“Last year at this time, Barbers Hill was in the lead on the girls side,” Tanner said. “On the girls’ side, we are stacking up to be district champions. That is what we are shooting for. With two meets left, we have been in the top-3 finishers in every meet we have been in. That is with Houston schools and everyone. We have led Nederland and Barbers Hill in every single meet. We tied Nederland in one.”

“The boys have been stacking up third,” he said. “That is still a regional qualifier. Unless there is a surprise, they should make the top three. Now, Crosby or Port Arthur, or one of those teams that haven’t come to a whole lot of meets could show up with a team. You never know, but we are looking for two regional qualifying teams.”

Page went to state as a freshman for PNG, but she is not running away with the crown just yet as Butler has closed the gap during the summer.

“(Page) was the fastest freshman in the region and she is returning right back to where she was,” Tanner said. “We have a little in-team, you say rivalry, but they are pushing each other. It is great competition. We have 3-mile Thursdays, where we time them, and Katherine is right where she was last year when she went to state. The only difference is Sanaria is right there with her.”

“We had to get creative last year in practice, because we didn’t have any girls that were running at the level of Katherine and we only had a couple of guys that could,” he said.

Page said she enjoys the friendly push from Butler.

The sophomore said she learned a lot about competing at a high level after making state in 2020.

Butler is in her senior season and ran during the summer to help get a track scholarship. The work has paid off during the cross country season.

“I wanted to do it to stay in shape, but it has helped me get a lot faster,” Butler said. “(Page) pushes me a lot to be better. I want to place high at regionals and make it to state.”

Tanner said he would like to see the two pushing each other for first and second in the district meet.

The head coach said Landon Proenza has been a pleasant surprise for the boy’s team.

“He is a soccer player that has never ran cross country before, but one of the runners told him to come out and he has been really good for us,” Tanner said. “He talked his brother in to running, too.”

PNG will run Thursday at Falcon Stadium in Huffman in its last meet before district, which is Oct. 14 at Clairborne West Park in Vidor.