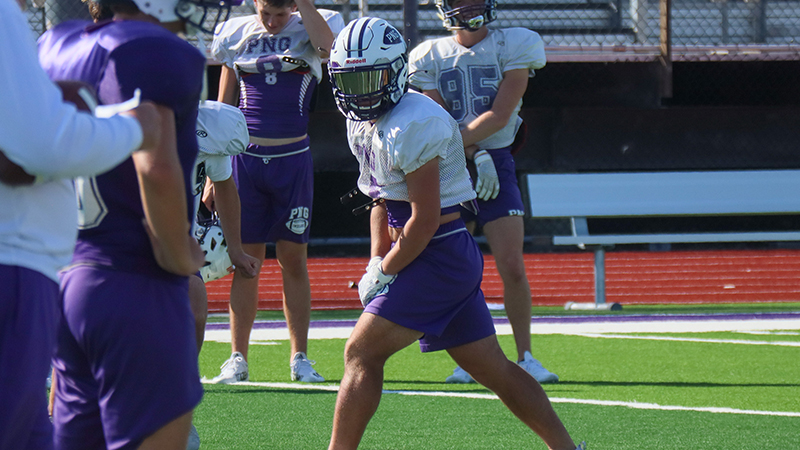 PORT NECHES — Port Neches-Groves receiver Carson Wallace has been around football all of his life. His grandfather coached at PNG and in Orange and his dad is the secondary coach for the Indians, giving the senior a unique understanding of the game.

“He is a coach’s son,” PNG Head Coach Brandon Faircloth said. “There is something about coaches’ kids. He is incredibly savvy and incredibly smart. He is very tough and has great hands. He is a physical blocker. He made some great plays for us as a junior. In his senior year, he is still making plays.”

Faircloth said the true mark of a receiver does not always show in the stat sheet.

“I judge a receiver by what they do when they aren’t getting the ball,” Faircloth said. “He is really special without the ball. He runs great routes and blocks. He is full effort every play and never takes a play off.”

Wallace said he tries to lead by example.

“I try to catch everything and block on every play,” he said. “I try to play 100 percent.”

Football is so present in the Wallace home that it even consumes his free time. On Sundays, Wallace is watching the Cowboys. When playing video games, he is likely playing Madden, which is a football game.

“My favorite player is Ceedee Lamb,” he said. “I try to watch all of the Cowboys games. I feel pretty good about them this year. We will see.”

He said his favorite subject is U.S. history, but he hopes to make an impact on PNG’s history books when it comes to playing rival Nederland.

“It is awesome,” he said. “It is the biggest game of the year. I am going to try to close out my high school career undefeated.”

Faircloth said Wallace has an advantage by growing up in a football family.

“When you grow up in the field house and grow up around it like this, there are things that you have seen that other people haven’t,” he said. “You have been on the sideline and watched games that other people haven’t. When you go home and your dad can talk about it with you, it is another level of advantage. It shows. He comes from a coaching family and it shows by the way he plays.”