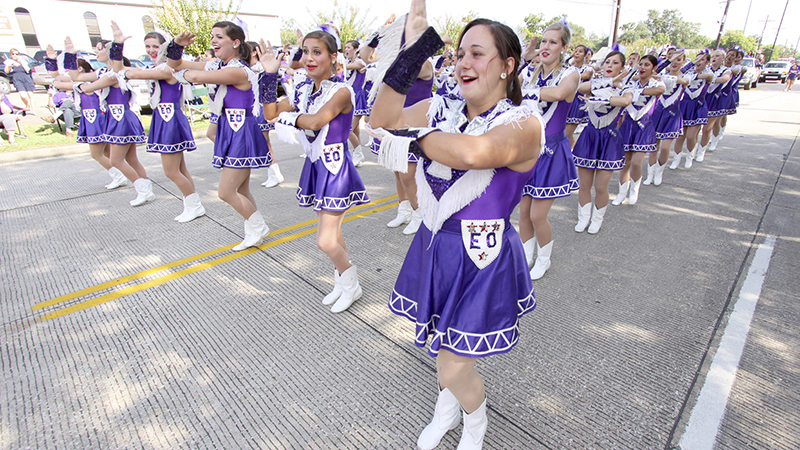 Indianettes dance down 39th Street to Cherokee during the Texas Pecan Festival Parade on Saturday morning in Groves.

GROVES — After a rainy 2019 and canceled 2020, the City of Groves is ready to retake the streets Saturday for the Pecan Festival Parade.

“We are super excited about it, and the parents are too,” said Debbie Snell, administrative assistant for the Groves Chamber of Commerce.

“I think everybody’s excited just to get outside,” said Ronnie Boneau, executive manager of the Chamber. “In 2019 we had it in the rain. This Saturday it’s supposed to be around 59 degrees.”

With the annual Pecan Festival Pageant occurring this past weekend, there will be a multitude of queens in the parade, Boneau said. But there will also be queens from other area pageants, including the Mexican Heritage Festival Queen, who was crowned Sept. 11.

And, the Chamber representatives said, now that the pageant has ended, there has been a steady stream of community groups stopping to sign up for participation.

The Port Neches-Groves High School band, as well as bands from both middle schools, will be participating. And since it’s an election year, Boneau said, there will be several candidates out campaigning.

“There are trucks to golf carts to some things I’ve never even heard of before,” he said. “They can put anything in there they want except a horse.”

The Pecan Festival is scheduled for Thursday/Nov. 4 through Sunday/Nov. 7 at 6200 Jackson Blvd.

Boneau said the reason the parade is held in advance of the actual festival is in order to allow participation from the bands, which often compete during weekends in October.

Applications are available at the Chamber of Commerce office, 4399 Main Avenue. For more information, call 409-962-3631.