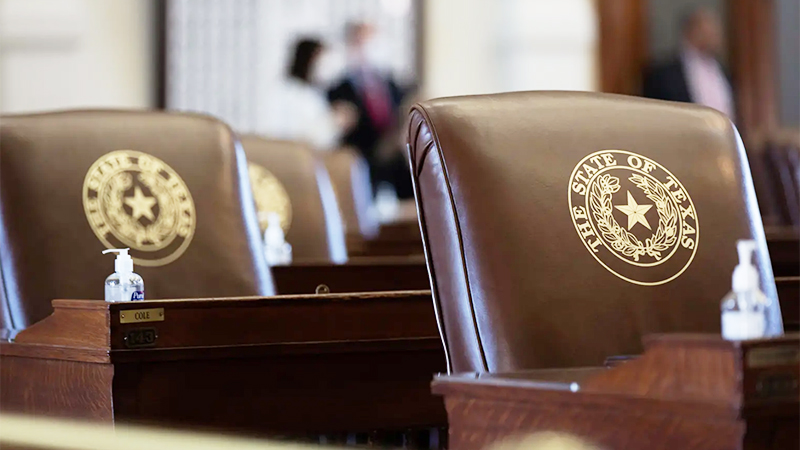 Texas Republicans will have complete control over the redistricting process, giving them the freedom to engineer politically advantageous maps for years to come. (Michael Gonzalez/The Texas Tribune)

In theory, the 2021 cycle of redistricting is about revising district boundaries to evenly distribute Texas’ fast-growing population and ensure voters have fair representation. But with the mapmaking in the hands of politicians, and their individual electoral survival at stake, redistricting has also become an exercise in political rigging.

The state Senate released its first proposed map on Saturday and the special legislative session in which redistricting will be featured formally begins Monday. Lawmakers will redraw the state’s maps for Congress, the Texas House and Senate and the State Board of Education to account for a decade’s worth of growth recorded in the 2020 census. The process will play out in backroom map drafting and public hearings and debates over maps meant to go into effect for the 2022 election.

In picking their voters — instead of the other way around — Texas Republicans stand to benefit from having complete control over the process with enough freedom to yield maps that will maintain or even bolster their majorities in the Legislature and in the state’s congressional delegation.

Here’s how it will work.

Lawmakers have to consider where the state’s growth took place

Most political districts have to be redrawn, regardless of any political motive.

The state’s population has swelled significantly — and unevenly — in the last decade, yet districts are supposed to be equal or, in the case of legislative districts, close to equal in population. On the congressional front, Texas lawmakers must also reconfigure the map to incorporate the two additional seats the state earned because of its growth.

Republicans seeking to entrench their power currently hold 23 of the state’s 36 congressional districts, 82 of the state’s 150 House seats and 18 of the state’s 31 Senate seats. But in controlling the redrawing of the state’s maps, they will have to contend with population growth that’s largely concentrated in areas where they are already in the minority and among populations that don’t generally favor their party.

Of the state’s 4 million new residents, 44% live just in the state’s big five counties — Harris, Dallas, Bexar, Travis and Tarrant. The first four are decisively in Democrats’ column while Tarrant is just barely holding on to its red status at the county level.

The fastest growth was experienced by Texas suburbs, some of which have either followed big cities into Democrats’ fold or are leaning in that direction. All 10 of the state’s fastest-growing counties in the last decade were suburban, each growing by at least 32%. Hays County — between Austin and San Antonio — grew the fastest with a 53% growth rate.

Meanwhile, more than half of the red counties that help build the Republican firewall in elections lost population in the last decade. The other half barely grew or largely fell behind in population growth compared to less rural counties.

The overall growth in red Texas was trounced by five suburban counties alone: Collin and Denton in the Dallas-Fort Worth area, Fort Bend by Houston, and Williamson and Hays near Austin. In the last decade, those suburban counties gained 1,033,634 new residents — 15,172 more residents than a decade’s worth of combined population growth in 215 solid red counties.

Across the state, districts held by both Democrats and Republicans have grown far beyond their ideal size, while others are significantly underpopulated. But Republicans face some complex decision-making if they want to expand their majorities in the statehouse and in Congress while shoring up suburban districts that are among the most overpopulated — some in areas that grew significantly because of growth among people of color.

Underpopulated Republican districts in rural areas, for example, could grow in geographic size to take in more residents from surrounding red areas. Each of those expansions could come with ripple effects as Republicans move toward the suburbs and urban areas where numbers may be less favorable for them.

Unlike in previous redistricting cycles, Republicans will have free rein to redraw and enact the state’s maps without having to first run them by the U.S. Department of Justice or a Washington, D.C., federal court to ensure they don’t leave voters of color with less say in choosing who represents them in Austin and Washington.

That protection, known as preclearance, was ended by the U.S. Supreme Court in 2013. The last time the Washington federal court refused to clear the state’s maps, it noted the case included “more evidence of discriminatory intent than we have space, or need, to address here.”

How lawmakers can manipulate district boundaries

Beyond drawing districts equal in size, lawmakers also generally work off of other redistricting principles, such as drawing districts contiguously, respecting geographic boundaries like city limits and grouping together “communities of interest” that share political interests. That’s why not every oddly shaped district should be automatically deemed questionable; communities aren’t built in neat shapes.

But the process leaves enough room for political manipulation, or gerrymandering, that is typically carried out through two main tactics — cracking and packing.

This, of course, would be a much more complex exercise in a real county where communities that support opposite parties aren’t so precisely split up. Lawmakers must also work through different population categories. Districts must be equal or close to equal in total population. But only a subset of the population in each district is eligible to vote. And even though they are using 2020 census data to draw their districts, the number of eligible voters changes every day, so lawmakers may also consider how much of a voting cushion they need to ensure a district will keep voting for a certain party in the years to come.

In gerrymandering for political gain, lawmakers also cannot discriminate against voters of color. This is complicated in Texas, where race and ethnicity cannot be easily separated from political affiliation. Voters of color are more likely to support Democrats and white voters tend to support Republicans, so boundaries drawn to purportedly benefit a party could ultimately end up reducing the electoral power of voters of color. That is called “vote dilution,” which is illegal.

Texas lawmakers have been repeatedly found to have crossed that line intentionally, tainting their maps by packing and cracking communities predominantly on the basis of race, and not political affiliation, to diminish their influence. In fact, state lawmakers have passed one or more redistricting plans that were declared unconstitutional or in violation of the Voting Rights Act in every decade since 1970.

To be sure, race can be used as a guide when creating or maintaining what are known as “opportunity districts” that comply with the Voting Rights Act and boost representation for voters of color. In a Hispanic opportunity district, for example, Hispanic Texans would need to make up the majority of eligible voters and usually have the opportunity to elect their preferred candidates. (The district also has to meet other complex criteria.)

Texas lawmakers have also intentionally discriminated against voters of color on this front. In the first maps lawmakers produced after the 2010 census, federal judges ruled that their use of race to configure some districts in the name of complying with the Voting Rights Act instead “turned the VRA on its head” because they purposefully used race to overpack districts in which Hispanic voters were already electing their preferred candidates.

How that manipulation results in lopsided representation

If Texas’ political maps were drawn proportionally to voters’ preferences, it would result in noticeably different maps, particularly among the state’s congressional delegation in which Republican representatives significantly outnumber Democrats.

This is an imperfect measure as districts are drawn to be equal based on total population, not the population that is eligible to vote. Additionally, 33% of registered voters did not cast a ballot in the last presidential election. But it shows how map boundaries can be drawn to tip the balance.

For example, the upcoming redistricting effort is likely to up the stakes in this lopsided representation as lawmakers figure out how to reconfigure the state’s congressional map to account for two additional districts.

With Hispanics behind half of the state’s population gain in the last decade, expect to see some lobbying for at least one of those districts to be a Hispanic opportunity district. But that district would likely elect a Democrat.

— Written by Alexa Ura and Jason Kao of The Texas Tribune, a nonpartisan, nonprofit media organization that informs Texans — and engages with them – about public policy, politics, government and statewide issues.