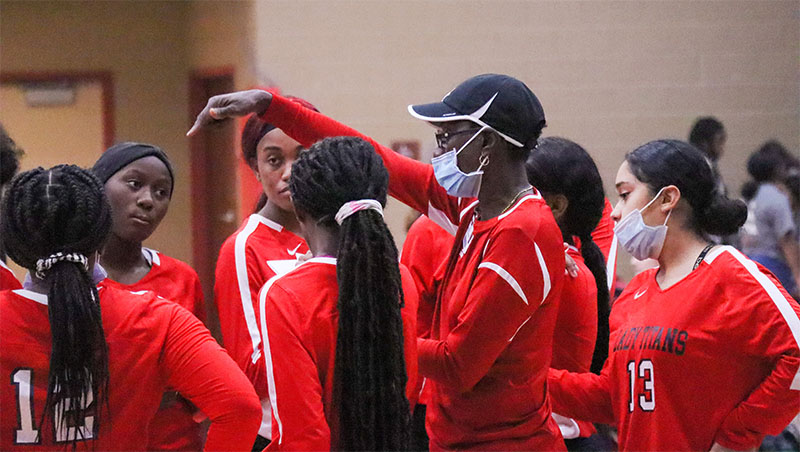 Memorial Head Volleyball Coach Debra Harris talks to her team in between matches in a 3-0 loss to Crosby Wednesday. (Chris Moore/The News)

Memorial is in search of its first district win after falling 3-0 to Crosby on Wednesday.

The game was originally scheduled for Tuesday but was pushed back a day after the district cancelled all school-related activities due to Hurricane Nicholas.

“I have a couple of rotations that I could’ve done better that we didn’t pick up until the end,” she said. “Once me and my assistant saw, we started picking it up. We just have to stop getting out to slow starts.”

Harris said slow starts have doomed the team all season.

Harris said one of the rotations she would like to try more of is moving Charnel Jones to outside as opposed to her regular spot in the middle.

“No. 5 has played really well,” Harris said. “I pushed her out and she played the ball well on the strong side, even though she normally doesn’t play that spot.”

Harris is still trying to figure out what her young team does best and how to get the most out of each of her players.

The win moved Crosby to 2-0 in district play. The Cougars will be back in the area Friday to take on Nederland.

Memorial will travel to Mount Belvieu to take on Barbers Hill on Friday.