ASK A COP — Can a police officer stop someone just for open-carry suspicion? 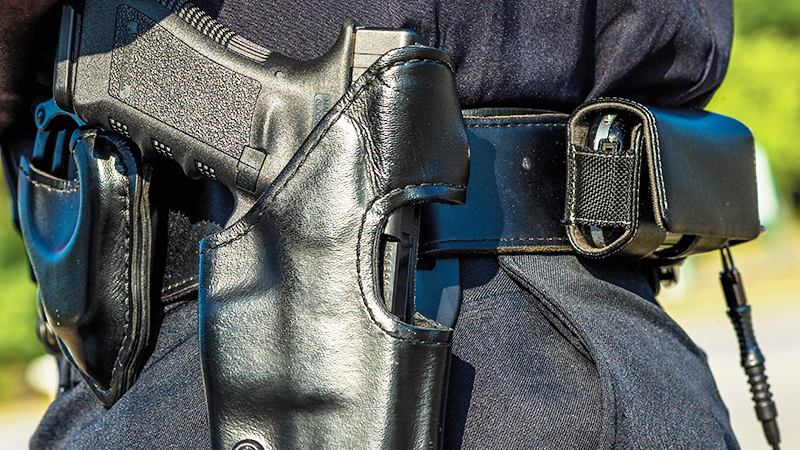 Jim from Port Arthur asks: Can a cop stop you if an open carry citizen is just walking down the sidewalk, open carry? Does the officer have the authority to stop this citizen and ID him if no crime has been committed?

Answer: A lot of questions surround the Texas House Bill 1927 that went into effect on Sept. 1, which gives citizens who are NOT prohibited by law to open or conceal carry handguns in the state of Texas. A police officer in Texas CANNOT stop someone MERELY because they are walking on a sidewalk and they are open carrying a firearm. In order for a police officer to legally stop anyone, they must have articulable facts of REASONABLE SUSPICION, not just mere suspicion. Reasonable suspicion is not enough for a police officer to arrest you, but they can LEGALLY detain you. Once you are legally detained and the investigating officer demands your identification, you are required by Texas law to present your identifying  information/card. This constitutional/open carry for non licensed citizens is something citizens and law enforcement communities are going to have to simply get accustomed to observing as a new normal and not becoming instantly ALARMED when we encounter a citizen openly displaying a firearm on their person as they walk.

Pauline from Port Arthur asks: I know we are in the age of cameras and catching everything on film so to speak. I was wondering what your thoughts are about dashboard cameras that we citizens can install in our vehicles.

Answer: I think you bring up something (dash cameras) that is very popular in other countries and the western states of this country, but it hasn’t bloomed yet in Texas. Dashboard cameras are able to aid law enforcement officers with actual footage of what actually happened prior to, during and even after an event. Dashboard cameras have been able to capture natural disasters like tornadoes, hail, lightning strikes and hurricane force winds.. Pauline, with that said, I don’t think a dashboard camera is a bad thing because it doesn’t require the driver to do anything that would distract them while driving as long as they turn it on and start recording at the beginning of their journey. We are in the age now where everyone wants to SEE what happened rather than be TOLD what happened. Cameras are EVERYWHERE on cell phones, homes, elevators, businesses, churches, in some cities at the intersections and many police officers have body cams on their uniform shirt. Dashboard cameras can only HELP you, not hurt!

Janet from Nederland asks: For the past few weeks we have been talking about speeding and momentarily accelerating above the posted limit. Honestly, speeding haven’t been a problem for me for many years. My biggest concern is people always tell me I drive too SLOW. If someone is in a rush, my vehicle should not be their mode of transportation, because I don’t like fast speeds. I NEVER drive my vehicle above 65 mph, and my family doesn’t like it at all. Is it a violation in Texas to drive too slow? Can I be given a ticket for going too slow? In my opinion, it is better to go slow than speeding.

Answer: Sounds like you are a safe and conscientious driver. If your driving behavior is like you described, “as long as you are driving in the RIGHT lane,” that is totally legal. Texas Transportation Code 545.3363 states “an operator may not drive so slowly as to impede the normal and reasonable movement of traffic, except when reduced speed in necessary for safe operation or in compliance with law.” Janet the normal DRIVING lane is the right lane, the left lane is designated for left turning and passing. Too many times motorist like yourselves drive under the posted limit in the left lane and clog up the flow of traffic (I hope that’s not you Janet SMILE!). Even if you are traveling the speed limit, you should get into the right lane as soon as is practical and safe. If you are going so slow in the left lane that you are preventing the normal traffic movement, then “YES” you could be cited for IMPEDING TRAFFIC. Keep this in mind if you want to go slower than the normal flow, “STAY RIGHT TO BE RIGHT!”

Join Me, Officer Antoine and the CREW, Stephen Buzzard Boots Mosley, Lelo “the mouth” of Hwy 69/73 Washington & Tejas Lil Man Morning Star for Ask A Cop live, on KSAP 96.9 FM The Breeze radio station every Tuesday from 1 to 2:30 p.m. Tune in via internet at ksapthebreeze.org. Call in your question live at 409-982-0247. Email your questions to rantoine@portarthurpd.com, call 409-983-8673 for a voice mail question or mail them to: Ofc. Rickey Antoine, 645 4th Street, Port Arthur, Texas, 77640. If you happen to see me in public, you can always approach and “Ask A Cop!”