Bulldogs take show on the road to play Houston Austin 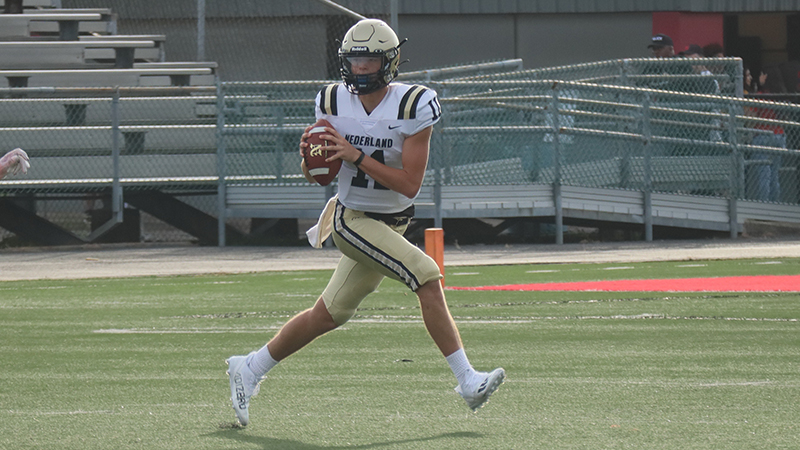 NEDERLAND — The Bulldogs are taking their game on the road this week as Nederland travels to Houston Austin to take on the Mustangs.

Nederland is coming off an impressive performance against West Orange-Stark, in which the Bulldogs led 14-6 in the third quarter before the game was called off due to lightning around the stadium.

“They showed us what we can’t coach,” Nederland Head Coach Monte Barrow said of his team. “They showed us they are willing go all out, put their bodies on the line and play together. It is all the things that you don’t work on. They showed us part of it, and it gives us confidence that if we practice the things we can practice, they will bring the rest of it.”

Nederland was supposed to play Austin last year, but the school elected to pull out after several Bulldogs tested positive for COVID-19. The Bulldogs scrambled to replace the game at the last minute and found a match with Lufkin.

Much like the Bulldogs in Week 1, the Austin Mustangs were only able to play a quarter of football before inclement weather cancelled their game against Wheatly. The Mustangs were down 8-6 when the remainder of the game was called.

“I know they were pretty much virtual the entire offseason,” Barrow said. “They didn’t really see their kids during the summer, so they might be a little behind when it comes to stuff like that. I told our kids to not base what they have seen on video. We were fortunate to have an offseason. They are going to continue to get better and better. They will figure it out.”

Barrow said film study indicated Austin has a lot of potential and he warned his team to not take their opponent lightly.

“We look forward to getting on a bus with this new team and taking a road trip,” he said. “It is not too bad a drive. It is about an hour and a half, but that is what we do in district. Besides Port Neches, everything else is a road trip. This will be good practice to see how they prepare themselves and their bodies. It is something these new guys need to experience.”

Austin Head Coach Theo Young sees the contest as a big game for his team.

“They made it to the third round last year, so we are looking for good competition,” he said. “It gives our kids a chance to play somebody outside of Houston that is a good team to see where we are at.”

Young said his team’s roster might be a bit short, but added he is confident in their ability.

“We still are feeling comfortable with the game,” he said. “It is not looking at just one group or trying to take advantage of a group. We just want to be prepared, both coaches and players, so we can have a good game.”

The game will kickoff at 7 p.m. Friday at Herman A. Barnett Stadium. The stadium is located at 6800 Fairway in Houston. Those who are not able to attend the game can listen on the radio at KLVI-AM 560 or watch the live stream on Sheffield Productions’ Facebook or YouTube page.