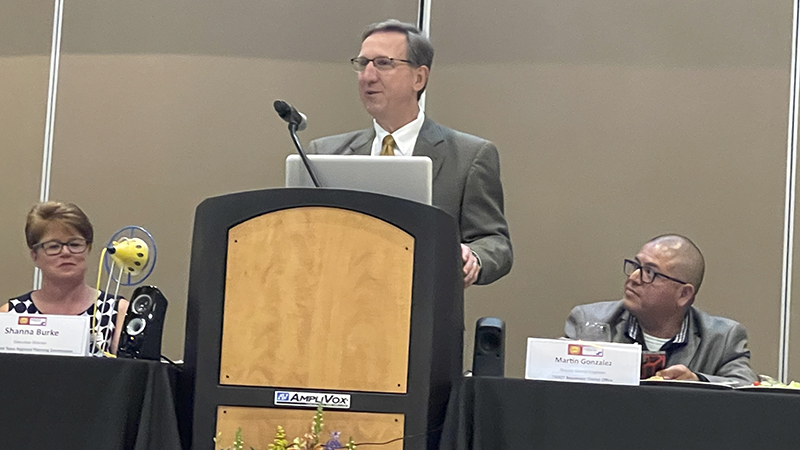 PORT ARTHUR — Representatives from city, county and legislative offices gathered at the Robert A. “Bob” Bowers Civic Center Wednesday for a luncheon hosted by the Greater Port Arthur Chamber of Commerce.

The event was originally scheduled as a legislative update; however, that will now take place at a later time this year.

Branick spoke on a multitude of topics, which included the aforementioned legislative session.

“Fortunately for Southeast Texas, having Rep. (Dade) Phelan as Speaker (of the House) this year, we’ve had a direct connection to Austin and been able to make our feelings known about various legislative prerogatives that have been put forth this session and almost without exception, we’ve been very successful,” he said. “We should consider ourselves extremely fortunate, for the first time in history, to have a Speaker of the House that’s our representative.”

The county judge also spoke on the coastal restoration efforts aimed at restoring the McFaddin Beach coastline to where it was 100 years ago to protect nearby wetlands from being tainted by saltwater.

For years Branick has petitioned state and national leaders for money from the BP oil spill in order to fund the project that would help protect the local 38,000 acres of chenier marsh.

“That marsh was rapidly dying,” he said. “We knew something had to be done.”

What began with $131 million in funding is now $182 million in funding, he said, and the General Land Office is in the process of awarding contracts to complete restoring the dunes to the remaining 18 miles of beach. Three miles have been completed.

Other topics included the recently-adopted county tax rate, which Branick said was below the effective tax rate and is now the ninth lowest in the 254 Texas counties.

She first spoke on the Commission’s recent efforts to include Jasper into an effort that also serves Jefferson, Hardin and Orange counties.

In addition, she said the commission is working to launch a needs-assessment project aimed at broadband internet.

“Broadband is huge right now, specifically as it is related to COVID. We’ve seen where the gaps exist and with the shutdown last year there were a lot of people both work-wise and education-wise who quite honestly couldn’t function because of the fact that they do not have broadband,” she said. “So it was hard for kids to continue their studies for school and work as well in some instances.”

She also spoke on the Southeast Texas Alerting Network, urging everyone to register. By doing so, area residents can receive texts and/or calls from the cities and counties of their choice in the event of an emergency, weather event, waterline breaks and a variety of other topics.

Registration can be done at www.thestan.com.

Gonzalez said on average, there are 10 fatalities each day on Texas highways.

“That’s very concerning and we need to make sure we’re doing everything we can to bring those numbers down,” he said. “One fatality is too many.”

Gonzales also spoke on a number of road and highway construction projects in and around Mid and South County.

Port Arthur Newsmedia will elaborate on those specifically in an upcoming article.