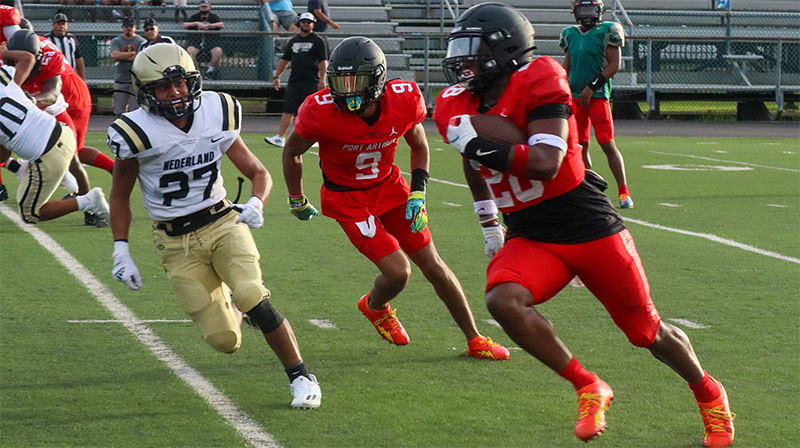 Memorial running back Adrain Hayward turns the corner in a scrimmage against Nederland. (Chris Moore/The News)

The Nederland Bulldogs and Memorial Titans got a better taste of what live game action would look like in their scrimmage at Memorial Stadium on Thursday.

The Titans running game led the way as Memorial won 21-7 in the three-and-a-half quarters the teams played.

The Memorial running back quartet of Adrain Hayward, Marcus Hayes, Kendrick Sam and Jaqualion Chaney got the bulk of the reps in the backfield. Hayes had the most production, making multiple defenders miss and found the end zone first for the Titans. 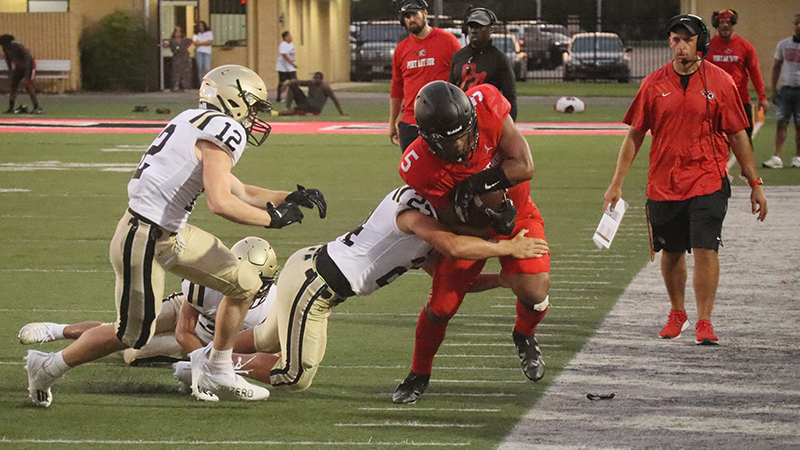 Memorial running back Marcus Hayes gets forced out of bounds by multiple Bulldogs. (Chris Moore/The News)

Broussard bounced back pretty well and was able to show off some wheels as he routinely moved the chains with his feet and scrambled to buy time to find receivers down field.

Nederland Head Coach Monte Barrow said the matchup was a good test for his offensive line to go up against one of the better defensive fronts in the state.

“We needed to realize the athleticism of what we were going against,” Barrow said. 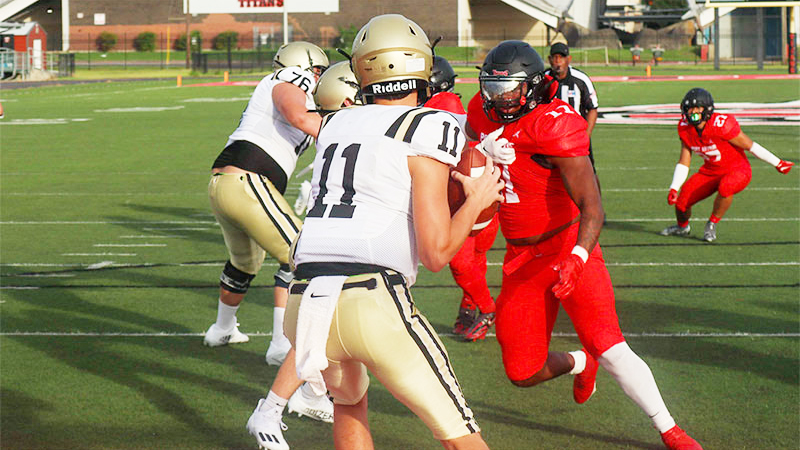 Memorial Head Coach Brian Morgan said he was pleased with his running back group’s effort.

“They are all really talented and a bit different in their skill set,” he said.

“AJ (Hayward) catches the ball really well, Chaney is just downhill, Marco (Hayes) is shifty and can play receiver. Kendrick Sam is a steady guy, who can do everything and play both of our running back positions. They are competitive and all want to play and understand that we can’t play all four at a time.”

Nederland running back Mason Beresford got on the board for the Bulldogs with a long touchdown that ended with the junior leaping for the pylon. Beresford is also in competition for the starting safety position on defense.

Barrow said the scrimmage helped show his team where they stood from a conditioning standpoint.

“When we recognize that, we have to fight through it and not be surprised by it. Some of them might not have felt that before in a game. That adrenaline and all of the anxiety that comes with it, we just have to make sure we know that feeling is there and we push through and not let it affect our play.”