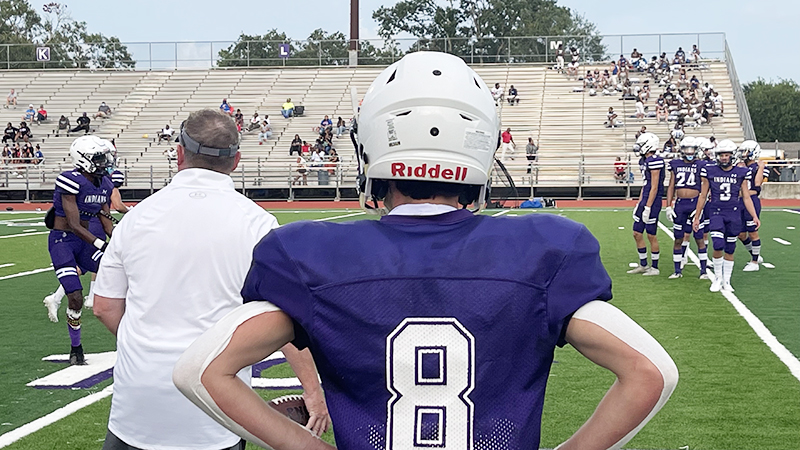 The Port Neches-Groves Indians certainly faced a good test in Thursday’s preseason scrimmage against the West Brook Bruins as they get ready for next week’s season opener.

West Brook’s high-powered offense gave PNG fits for most of the evening as the Bruins piled up nearly 400 yards of offense in racking up four touchdowns and a field goal in an event where no official score was kept. The Indians had one touchdown, that coming on a 21-yard run by Koby Trahan.

“We schedule tough teams like this for our scrimmages to help us get ready for our season,” PNG coach Brandon Faircloth said. “This shows us what we have to work on. We’ll watch the films and adjust.  These scrimmages and our non-district games get us ready for district play. For us, it’s all about the district.”

Trahan rushed for 33 yards on nine carries. Quarterback Cole Crippen threw for 125 yards, 83 of those to Landon Guarnere.

“We did some good things tonight,” Faircloth said. “We’re looking forward to the season opener at home next week against Jasper.

West Brook, under first-year coach Chuck Langston, saw quarterback Bryce Anderson throw for 198 yards and two touchdowns, both of those to Dre Dennis, who finished with 130 yards receiving. The West Brook coaching staff made sure to point out the contributions of offensive linemen Mykel Janise and Jayden Davis. The Bruins, a Class 6A school, face cross-city rival Beaumont United at 7 p.m. Aug. 27.

“we’re a 5A school going up against a top 6A school,” Faircloth said. “It’s not easy, but these are the games that point out our weaknesses and make us better.”

“I don’t know anything about Jasper, but I know that Coach Barbe always has his teams ready to play,” Faircloth said. “I’m looking forward to opening our season at home in front of the best fans in the state of Texas.”