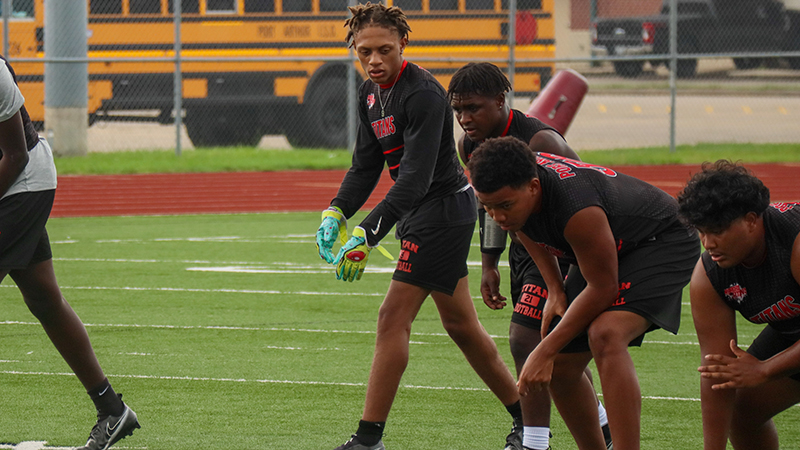 Memorial's Illijah Williams, left, lines up in the slot at practice. Chris Moore/News

Memorial receiver Illijah “Lala” Williams made All-District first team last season as one of the team’s leading pass catchers. The senior also holds the ball for field goals and serves as the Titans’ backup quarterback.

“He is very consistent,” head coach Brian Morgan said. “He catches the ball really well. He is probably the second-best quarterback in the league to be honest with you. If something were to happen with (starting quarterback) Jah’mar (Sanders), I think we would still win a lot of games with Lala. Whatever you ask him to do, he does it.”

Williams said he doesn’t hesitate to fill a role if it needs to be done.

“If no one else is going to do it, I’ll do it,” he said. “I will be on special teams. I will be the punter, long snapper. It doesn’t matter to me.” 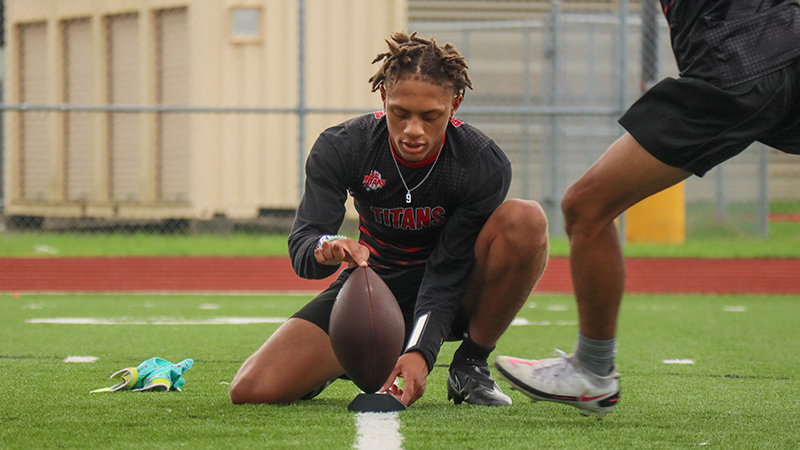 His inquisitive nature has drawn him towards journalism at Memorial.

“We talk about the news and stuff and that is entertaining to me,” he said.

Sanders and Williams are related through their fathers and have played football together since they were small.

“When we were little, I played quarterback and (Sanders) used to play running back,” Williams said. “Me and him used to talk about the plays and make our own plays. It helped us develop.”

Now that they play varsity together, the two meet up on the sidelines to talk about what each other sees.

“We talk a lot,” Williams said. “He wants to see what I am seeing.”

“They have a really good rapport,” Morgan said. “I think he is a guy that Jah’mar looks to on third down as a guy he can get the ball to and is confident in.”

Despite having a slight frame, Williams is unafraid to stick his nose in for a block. He usually lines up in the slot and is no stranger to blocking.

“He ain’t very big, but he blocks his butt off for us,” Morgan said.

Williams said he is laid back. He added that he spends most of his free time sleeping.

“I am just chilling in the house,” he said. “I don’t really do that much.”

The reserved receiver has high expectations for himself and team. His goal is to win state this year.

“We are growing as a team and getting our chemistry together,” Williams said.

He also wants to make All-State and jokingly put the pressure on his relative to make it happen.

“Hopefully, Jah’mar will get me right this year,” he said laughing.