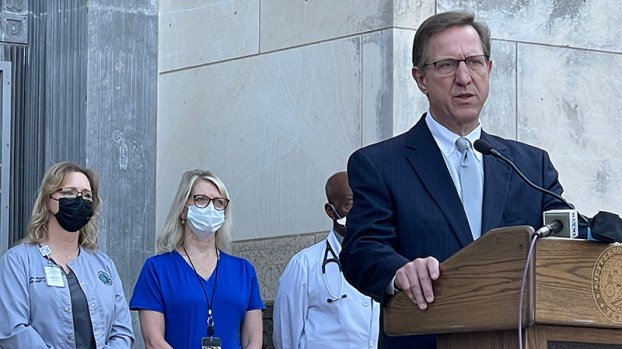 Mid and South county residents who test COVID positive will soon be able to receive Regeneron monoclonal antibody treatment to help their bodies fight the illness.

Following the approval of a multi-county agreement approved Tuesday by commissioners; Jefferson, Hardin, Orange and Jasper counties together would lease the former Golden Triangle ER, located at 5550 Eastex Freeway in Beaumont, to treat COVID-positive individuals from all four counties.

“We met with all the area hospitals about the potential of an infusion center, the main goal of which is to administer monoclonal antibodies to those individuals who test positive…prior to the time they require hospitalization,” County Judge Jeff Branick said Tuesday during the weekly Commissioners Court meeting.

“The counties would be responsible for the rent of the building. Baptist Hospital has agreed to make the building ready for use. They’re currently able to do about 30 patients a day throughout all their operations. This would aim to to do at least 150 patients a day.”

Leasing the building will cost $1,300 a month, split between each county based on population, with an estimated $2,000 per month going to utilities.

Branick said by current Census numbers, Jefferson County would likely pay 60 percent of the cost while the other three counties would pay the additional 40 percent.

However, there is a contingency in the lease that allows for dissolution within 10 days.

“We have a 10-day out so if this occurs as we hope it will occur — if it’s like the United Kingdom where it was a quick up and down spike — we have a 10 day out on the lease,” Branick said.

The funds would come from the American Rescue Plan Act.

Todd Senters, associate vice president of operations for Baptist Hospitals of Southeast Texas, said there are two ways a patient can be referred to the infusion center.

“One is direct referral from that individual’s primary care physician, where they will have the authority to write an order for the Regeneron to be administered,” he said. “The second pathway would be if an individual knows they have a positive test, there will be a hotline established by the county for them to be able to call. We will then secure an order on behalf of that patient for them to be treated.

“Either pathway, they will then be given a scheduled appointment time to arrive at the treatment location so that we will closely guard and make sure that those scheduled times are abided by and those individuals be escorted into the building to be treated in a protected, secured location so that we’re preventing contamination to other individuals who may not be infected.”

Regeneron, he said, is provided by the government and therefore free of charge to patients.

However, as Commissioner Bo Alfred said, testing is not always free to everyone. While widely done in most doctors’ offices, a co-pay may still apply. Therefore Alfred asked for the county to add a free testing site, which Branick agreed to look into.

As of Tuesday, there were an estimated 2,828 active cases of COVID-19 in Jefferson County, according to Texas Health and Human Services.

Gov. Greg Abbott tested positive for the virus Tuesday. According to information from his office, he is vaccinated, experiencing no symptoms, and now receiving Regeneron monoclonal antibody treatment.

“Governor Abbott is fully vaccinated against COVID-19, in good health, and currently experiencing no symptoms. Everyone that the Governor has been in close contact with today has been notified. Texas First Lady Cecilia Abbott tested negative,” according to a Office of the Governor Communications Director Mark Miner.