Linebacker Jaice Beck building off All-State season; leading Nederland on & off the field 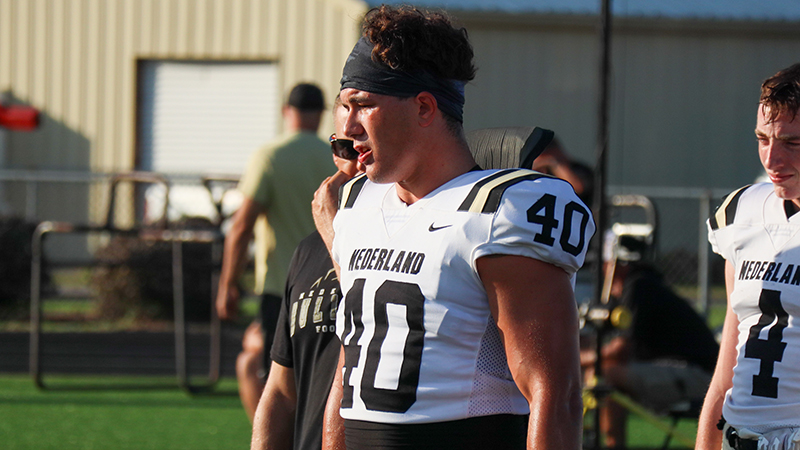 NEDLERLAND — Prior to a scrimmage against Hamshire-Fannett, a coach for the Longhorns went over to Nederland defensive coordinator Chris Theriot and pointed out a linebacker in awe.

The coach was pointing towards senior Jaice Beck, who runs a 4.6-second 40-yard dash at 195 lbs. Last year, Beck was named tAll-State second team, recording 133 tackles with seven tackles for loss. He was also named as a Willie Ray Smith Award finalist.

Beck has said he enjoys the physicality of football.

“I love hitting people,” he said. “I try to nail them every play.”

His favorite play came in the Bulldogs’ 2020 overtime win against Barbers Hill. Beck was in on the tackle that forced a fumble on the first play of overtime. His teammate picked up the ball and returned it 75 yards for a walk-off touchdown. 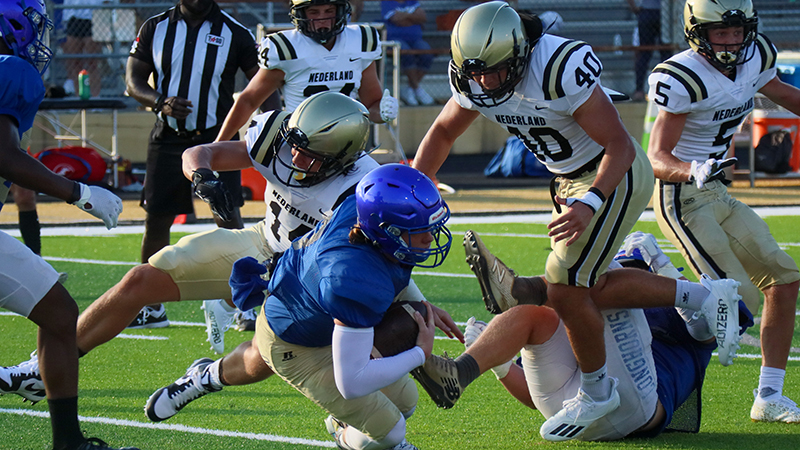 Jaice Beck, 40, leaps on top of a quarterback during a scrimmage. (Chris Moore/The News)

When he is not on the football field, he can be found hanging out with friends.

Beck said he is playing fantasy football this year for the first time.

“The game has changed so much,” he said. “In that position, you have to be able to run the way he runs. It is not like old-school football, where the game is played inside the hashes. You have to do that and play sideline-to-sideline. I think he brings that in every game.”

“In practice, even in our pass drops, Coach (Monte) Barrow talks about him being 30 yards downfield walling off a receiver,” Theriot said. “His range is tremendous. He has great eyes and can pick up the run and the pass scheme quick.”

Beck said Hall of Fame linebacker Ray Lewis is his favorite player of all time.

“I watch his highlights before every game,” he said.

“The year he had last year and the way he practices, guys respect that and look up to him,” Barrow said. “He does the right things in class and away from school. He is not the guy that makes the newer guys feel like they are not part of it. He does all of the little things.”

This year, Beck has his eyes set on building off of where the Bulldogs left.

“I want us to be better this season and have a great year,” he said. “We have a lot of young kids. We want to get them ready early on and have a good one.”

The Bulldogs star attended multiple college camps during the summer and nabbed offers from University of Texas-Permian Basin and Louisiana College.