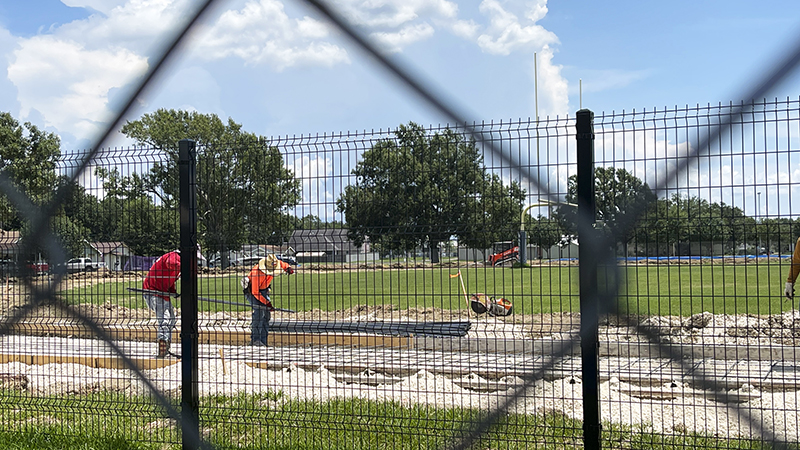 While recent rains have delayed the completion of two community tracks, work remains underway at Port Neches and Groves middle schools to turn the campus amenities into community assets.

“The rain has created some problems for us this year,” said PNGISD Superintendent Dr. Mike Gonzales at this week’s regular board meeting. “It finally stopped raining, but the rain did create some problems for us early. Because of that these tracks are not going to get done probably until sometime in September.”

The decision to turn the two middle school tracks into replicas of that at the high school came in early May, and will be funded by money acquired from Total.

“We have had people come to us at board meetings before and ask us and beg us to open the football stadium to them, but we already know how much that cost us every year in repairs because people were coming in and tearing up our stuff,” Gonzales said. “So it’s important for us to take care of these tracks. They’re going to be here for a long period of time.”

Fencing that matches that recently added to the high school track has gone in place, and some of the lighting that will be operated by Entergy has been put in place. The existing tracks will be replaced with 4-lane tracks made with the same turf used at the high school.

Earlier this year, administrators noticed damage to the high school track that required complete replacement. Hellas Construction quoted the district less than $1 million to use the same materials at all three locations.

The Austin-based company has been maintaining the high school field turf since 2012, following a lawsuit filed by PNGISD against FieldTurf — the company originally hired to lay the turf following a $10.2 million stadium renovation approved in 2007 as part of a bond issue.

Not long after the turf was placed, it began to “come up,” administrators said.

The turf is currently under replacement as part of continued maintenance.

However, a recent hiccup with the high school track delayed that project by about a week.