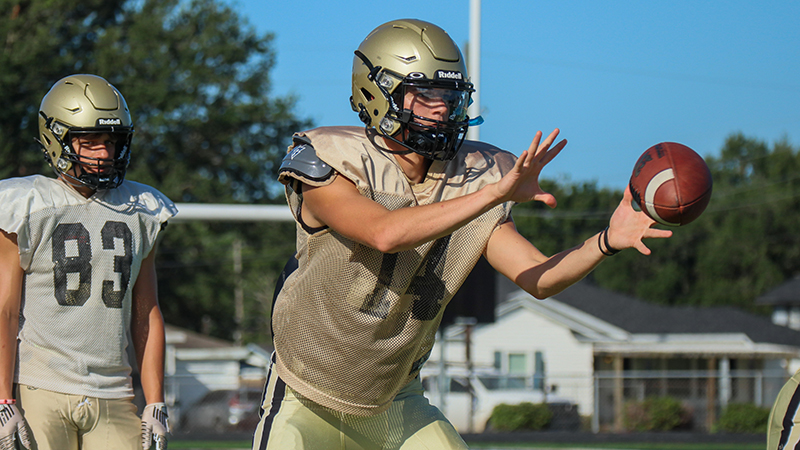 NEDERLAND — Bulldogs new starting quarterback Luke Broussard wants to see himself and teammates make strides in the right direction during their upcoming scrimmage against Hamshire-Fannett.

Nederland hosts the Longhorns at Bulldog Stadium at 6:30 p.m. Friday.

“I’m definitely excited to start the real season,” Broussard said. “It is going to be fun. We have been working hard.”

The Bulldogs have two scrimmages this year with Nederland taking on Memorial next week.

Nederland Head Coach Monte Barrow said he wants his team to focus on the basics.

Barrow wants his team to focus on tempo. The two teams will play controlled, which is basically a practice setting between the two teams. The squads will also play at least one “live” quarter to simulate a real game.

“We want to work on the tempo and getting in and out of the huddle,” Barrow said. “There are a lot of things that we try to harp on in practice that they won’t realize until the referee throws the yellow flag.”

Barrow said he is keeping an eye on a few position battles that will play out over the next few weeks.

“We are always looking to get better,” he said. “We want to see how those guys compete… There are about three or four guys that are battling for that spot. They are all close. It is really going to come down to who performs in game situations against another opponent.”

The Bulldogs coach said Nash Leonard, Ricky Galvan, Dominic Stimson and Kaydn Gonzalez are competing for the outside linebacker position.

While Broussard is not in a contested battle, he said he wants to focus on improving his throwing and anticipation.

“We are going to (be) mixing the twos and the ones,” he said. “We are trying to find out, still, who can make varsity and beat out another person. We are looking at a lot of substitutions. There are always a lot of question marks until you play a different team… I would say all of our skill positions are up in the air. That is a good problem to have. The trenches are more solidified.”

Waggoner wants his team to get conditioned to run a full game.

“This is the first step,” he said. “You can try to practice at a high level. It never fails. In my 32 years, you are still winded in that first and second scrimmage for sure. It takes you a couple of ball games until you can finish a game unless you have good depth.”

Both coaches said the players have been more upbeat with the chance to face off against another team.

“They can see the light at the end of the tunnel,” Waggoner said.

The freshmen and JV will start at 5 p.m. and varsity teams will scrimmage at 6:30 p.m. Friday at Bulldog Stadium.

Read here for what Memorial coaches are planning ahead of this week’s scrimmage.