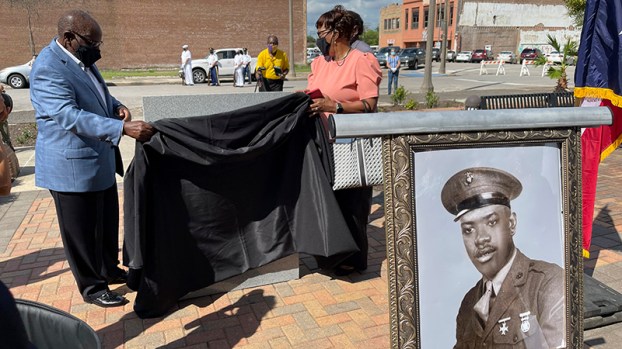 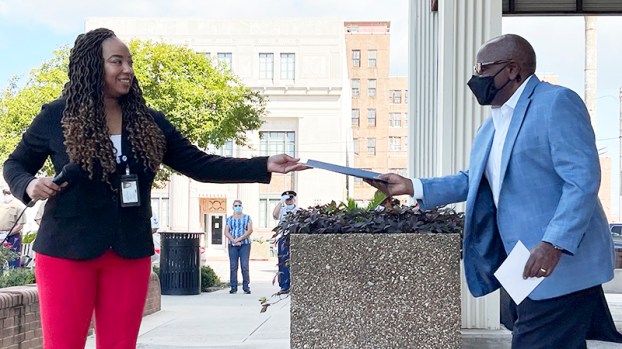 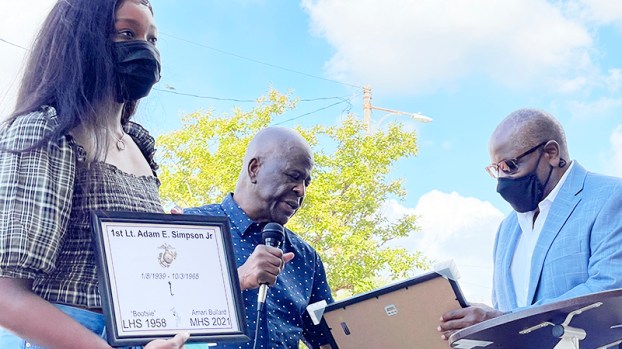 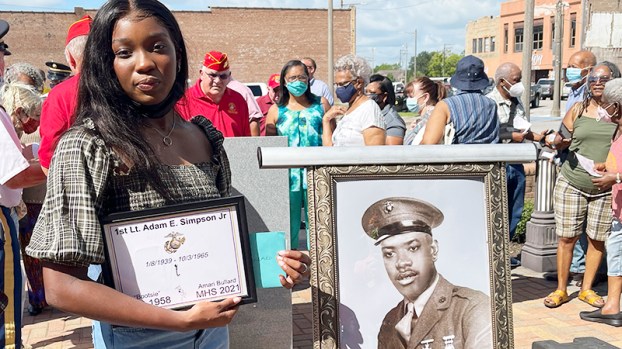 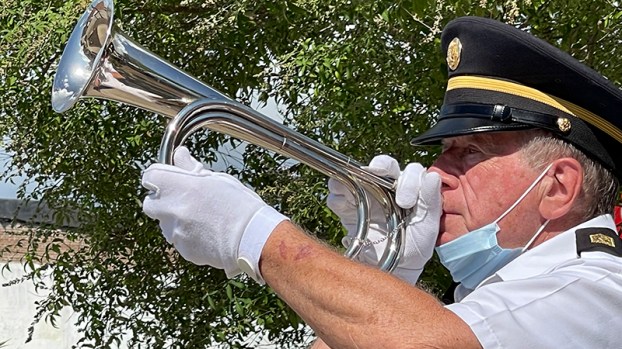 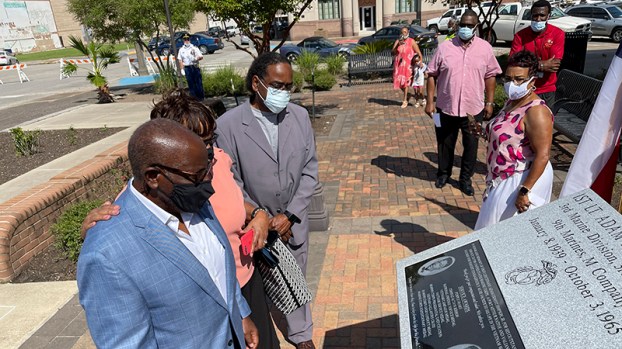 Lt. Adam Earnest Simpson Jr. died in Vietnam one year after joining the U.S. Marines. He was the first soldier from Port Arthur to die in Vietnam. (Monique Batson/The News)

The last time Harold Simpson spoke to his brother, Bootsie — as he was affectionately called — asked Harold to let him know the moment he became an uncle.

Harold, 19 at the time, and his girlfriend were expecting.

“My son was born on Sept. 8,” Harold told the crowd gathered Tuesday in honor of his brother. “And being the crazy fool that I was at that time, I thought, ‘Oh I’ve got time to write and let him know,’ not knowing that Oct. 3 would be the day that he would die.”

Tuesday his family, friends and former classmates joined city leaders and the Southeast Texas Veterans Service Group in honoring the fallen Marine by unveiling a plaque in his honor located at The Pavilion on Proctor Street.

It was a project seven years in the making.

“For years to come it will be written in history that this illustrious gentleman has contributed in a very meaningful way, not only to the development of this city, but to this country,” City Manager Ron Burton said at the unveiling.

“Many times these stories are not told. But I think it’s our responsibility as individuals — all of us collectively — to ensure that it’s inscribed somewhere so that the future generations that come can visit this monument and know that (people) like Mr. Simpson have gone before us and have paved the way for all of us who are American citizens.”

Adam, 26 at the time of his death, had served only one year when he lost his life in battle. He was the first Port Arthur resident to die in Vietnam.

“It was strange that right before he went to Vietnam, I lived in New York and he came to New York and we had a visit together,” Harold said.

“He was determined to come back and get his Ph. D. at NYU in New York. So I asked him, I said, ‘Man, what in the world made you want to join the Marines?’ And he said to me, ‘The Marines have less black officers than any other branch in the service.’ I said, ‘Well what made you join the Infantry?’ The Infantry had less black officers than any other branch of the Marines. So everything he did, he had a purpose.”

The two brothers would not see each other again.

At the dedication ceremony Tuesday, Adam was recognized by a proclamation from the mayor, read by Councilwoman Ingrid Holmes and then presented to Simpson’s family.

But he was also recognized for another achievement — his reputation as the best drum major to ever march at Lincoln High School.

And with that, Memorial High School Drum Major Amari Bullard was asked to come forward as she was presented with a certificate from Adam’s classmate.

“As President Kennedy talked one time about handing off the torch, she is now the standard for drum majors here in the Port Arthur School District,” Thomas Jones said. “We hope that you continue to perform in the same way that Adam did as a student and as a drum major.”

Prior to unveiling the monument inscribed with his brother’s photos and achievements, Harold said, “With all that he did, with all that he anticipated would happen, I know he had no idea that this would happen. No idea that he would be such an example to our young people. He didn’t make it to come back and get his Ph. D., but right now this is more than any Ph. D. could ever obtain.”