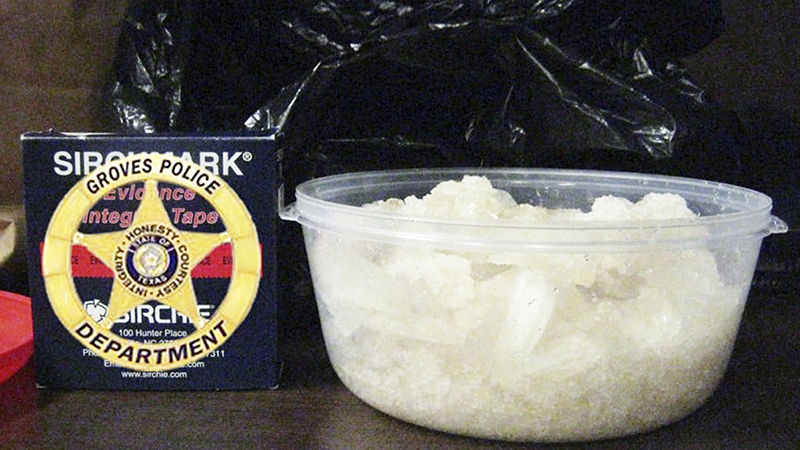 A photo of the seized methamphetamine. (Courtesy photo)

GROVES — A traffic stop in Groves led to the arrest of two men and the seizure of more than a kilo of methamphetamine.

In the early morning hours Thursday, Groves Police Department officers stopped a Chrysler 300 for a traffic violation in the 3200 block of Texas 73, according to a release.

Officers spoke with the two men in the vehicle, ages 25 and 34, both of Silsbee and reportedly developed probable cause to search the vehicle.

After searching the vehicle, officers discovered 2.2 pounds of methamphetamine.

Both men were arrested and brought to the Jefferson County Correctional Facility, where they were charged with manufacture or delivery of substance in Penalty Group 1, a first-degree felony.

Chief Deputy Kirk Rice said this remains an active investigation and he could not release the names of the men who were arrested.

Also listed is Jacoby Rochea Bass, 25, on a charge of manufacture/delivery controlled substance with bond at $250,000 plus a charge of driving with license invalid with bond of $150 and unlawful carrying of a weapon with bond at $5,000.