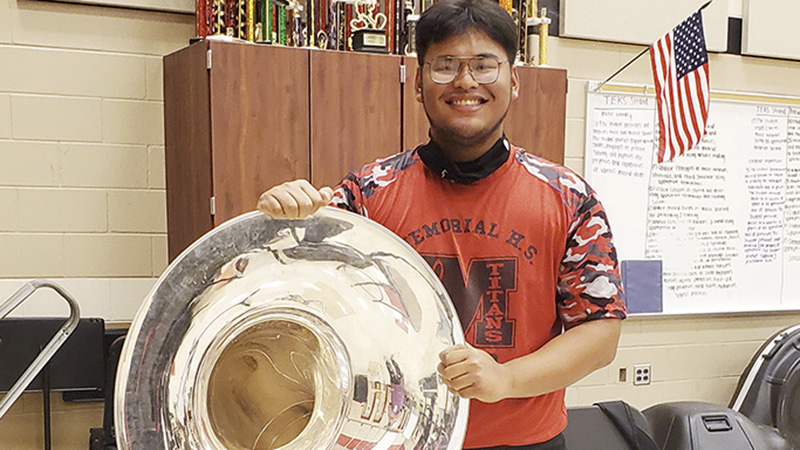 C-Jay Cunanan recently referenced a saying by his band director: If they show him a good band, he’ll show them a disciplined band.”

Cunanan plays a big role in the band’s success. The tuba-playing senior at Memorial High School is band captain.

Band director Alex Frazier said Cunanan is one of the band’s brightest stars.

“He is somebody who has an extremely rare work ethic for his age, something you just don’t see in this generation of students,” Frazier said. “He has a real blue collar mentality about everything he does, whether that’s his workouts or whether that’s learning the instrument or learning the marching maneuvers. 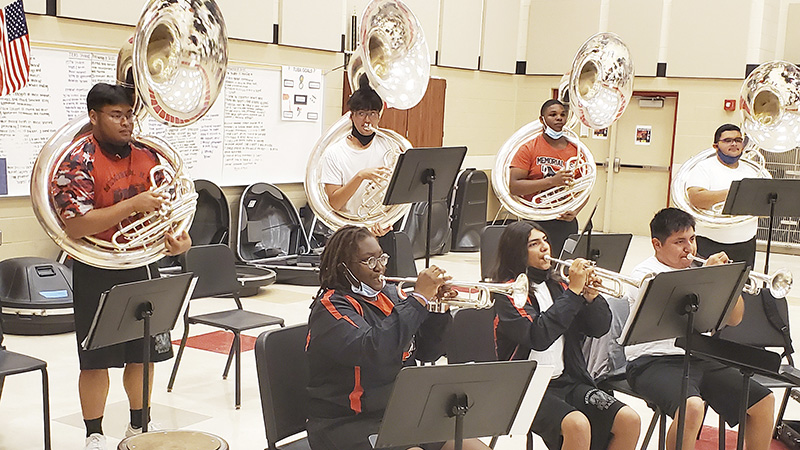 “And I think beyond that he’s probably been one of my favorite leaders we’ve had in the last couple of years. He has a ‘do as I do’ type of attitude rather than ‘do as I say,’ so he always leads by example.”

Rather than just telling people what to do, Cunanan is the first person out there to do a specific action and he does it with zeal, the band director said.

As band captain, Cunanan is the highest-ranking student in the band. He’s responsible for warming up the band before the director takes the podium and runs the band through the basic marking maneuvers until the directors are ready to start drill instruction.

Cunanan began in band in middle school and is now a senior at Memorial. He said being band captain isn’t much different than being a new student but did acknowledge there are more responsibilities than before.

Band students tend to spend a lot of time together. During band camp in the summer they are together from 8 a.m. to 4 p.m., and during school they meet after class from 3:30 to 6:30 p.m. Monday through Thursday then perform on Friday nights.

“We probably spend more time together than with people we go to school with,” Cunanan said. “But we have our fun times, our moments. We get to relax and get our little breaks.”

Cunanan reacted to the comment Frazier made of him leading by example.

“Before I can lead anybody else, I’ve got to focus on myself,” Cunanan said. “I have to make sure I’m in check, wearing the right uniform, shirt tucked in. Basically leading by example. That’s the rule.”

That responsibility extends to when the band is on the field.

“When we say ‘ready, 1.2.3.4,’ I make sure my knees are up because if I’m the leader and I’m walking or I’m just doing whatever or I’m playing around with other people, people are going to see that and they’re going to follow my example, so I have to lead them.”

Even when he’s not in the band hall or on the field, he’s got music on his mind. It’s like he can hear music in everything — “I feel like band can be incorporated into everything.”

“When you play music if it’s a 4/4 time, it’s math. It’s basically what you do outside of band you do in band,” Cunanan said.

The future holds many possibilities for the high school band leader. He has been acknowledged by Texas Southern and Southern band directors during freshman and sophomore years during various band camps.

He’d like to major in physical therapy first and if that doesn’t work out, somewhere down the line he’d like to get a degree in culinary arts.

But he does have some plans to incorporate before he graduates high school in 2022.

“I feel before I graduate, it’s my last year — I talked with the other leaders, I talked with the band directors, my goal for this year is start a foundation of discipline and leadership across the band,” he said. “Because once I’m gone the other leaders that’ll still be here next year won’t have my supervision or any other senior supervision that knows what to do. So our job is to keep tradition, keep discipline and encourage leadership.”

Band has given Cunanan a lot. There are valuable memories and the amazing people he’s met.

Being a part of the band has led him to places he’s never been to before: Louisiana, San Antonio, Six Flags, he said.

“There’s a lot of great memories,” he said.