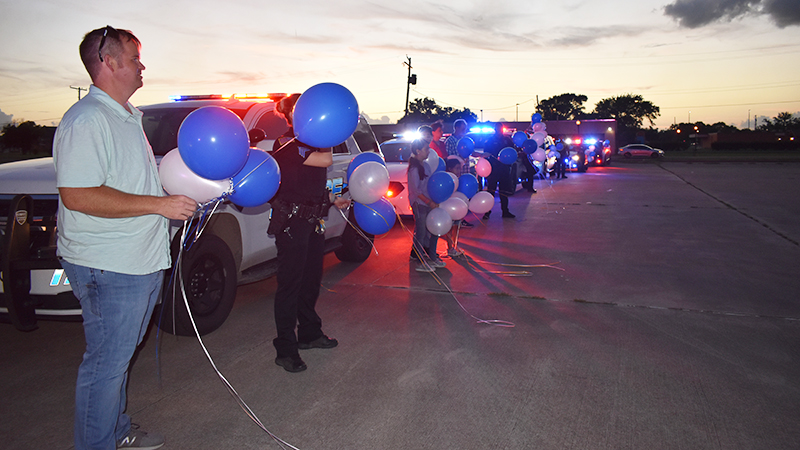 Port Arthur Police Det. Eric Thomason, left, and others prepare to release balloons in a show of support for Beaumont Police Department for the one year anniversary of the death of BPD Officer Sheena Yarbrough-Powell. (Mary Meaux/The News)

Port Arthur Police officers gathered Sunday night in a parking lot near the seawall for a balloon release as a gesture for their brothers and sisters with the Beaumont Police Department.

“We wanted to show support for the Beaumont Police Department as they recognize the one year anniversary of the passing of Sheena Dae Yarbrough-Powell,” Port Arthur Sgt. Shelby Harper said. 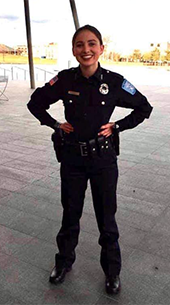 Harper said she met Yarbrough-Powell before and she was a sweet person.

PAPD vehicles lined up in a parking lot of Woodrow Wilson Early College High School and turned their overhead lights on. The red and blue lights flashed in the darkening sky and the officers — including some recently retired officers — each held several balloons and waited for the cue to release them.

“She lost her life in the line of duty and although she wasn’t a member of PAPD she was still a member of the blue family and for the officers, especially these local agencies, it still hits home,” Officer Wendy Billiot said.

“PAPD has been fortunate to not have as many in the line of duty deaths as other agencies but we still support those agencies and mourn their loss as if they were our own.” 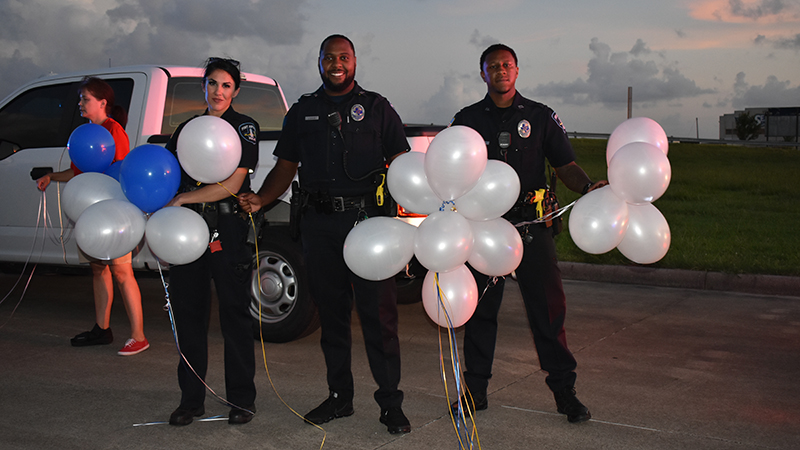 Lt Ryan Byers and retired Lt. Terry Chance each manned a drone to capture the event.

Retired Lt. Martin “Bubba” Blitch and his wife Nancy were also on hand for the balloon release.

“It’s because of a tragedy we’re here but we definitely want to show support for Beaumont PD and what they’re doing to remember Yarbrough-Powell and we continue to support her and her family,” Blitch said, adding the death impacts others. “When you lose an officer, we all lose an officer.”

Blitch offered thanks at being told of the event so he and his wife could attend.

On Aug. 9, 2020, 23-year-old Officer Sheena Yarbrough-Powell and then 28-year-old Officer Gabriel Fells were traveling northbound on Cardinal Drive near the Texas 347 overpass in Beaumont when a wrong way driver not using headlights struck them head-on.

BPD also held an event in remembrance of the fallen officer. 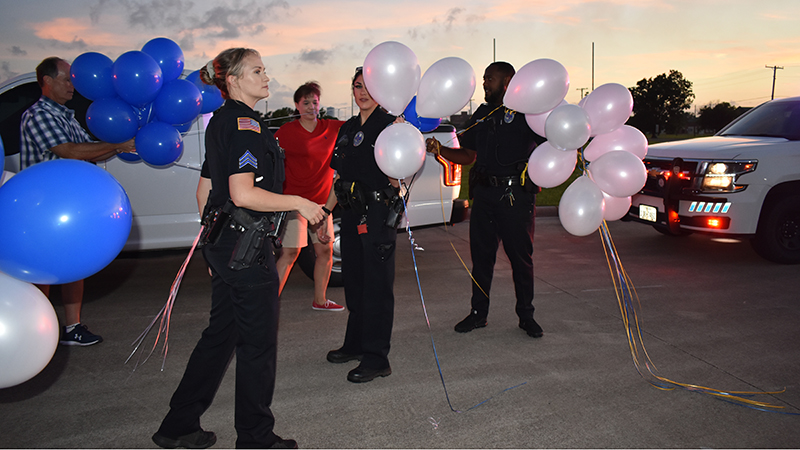