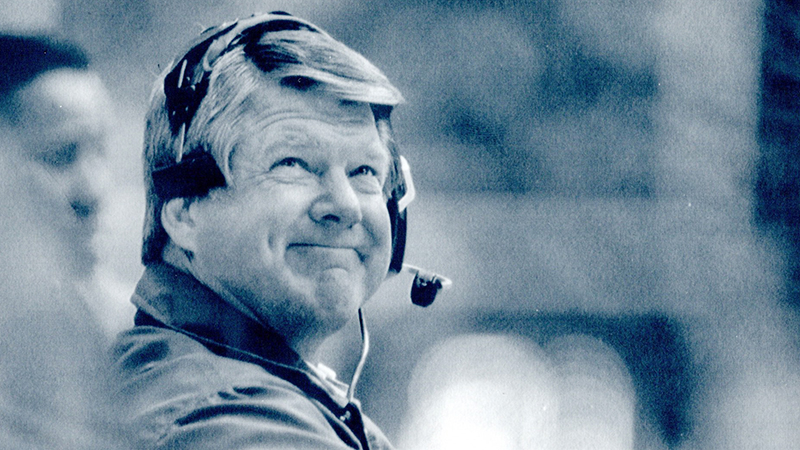 Dallas Cowboys coach Jimmy Johnson watches the time click away late in a 41-10 win over the Phoenix (now Arizona) Cardinals on Dec. 18, 1990. (Associated Press via Museum of the Gulf Coast)

Jimmy Johnson will join one of the most prestigious clubs in all of sports when he is inducted into the Pro Football Hall of Fame today.

Johnson, a Port Arthur native, was voted into the HOF last year, but the ceremony was pushed back due to the pandemic.

Johnson led the Cowboys to two Super Bowl championships, to go on top of his collegiate national championship with the University of Miami Hurricanes for the 1987 season.

Such an accomplishment would normally make a coach a candidate to be selected for the Pro Football Hall of Fame within the first few years of eligibility. To be eligible, a player or coach must have been retired for at least five consecutive seasons.

Johnson last coached in the 1999 season with the Dolphins. He is currently part of the NFL FOX broadcast team.

Johnson is credited for a Texas-sized turn around in Dallas. He was coming off a 52-9 record coaching the Miami Hurricanes and winning a National Championship at the college level.

Johnson took over the Cowboys, going 1-15 in his first season. The Cowboys improved to 7-7 with two games remaining in 1990, but dropped their last two games for their fifth straight losing record and fifth straight season without a playoff berth.

“I was pretty well my own recruiting coordinator in college,” Johnson said. “I was pretty active in evaluating talent. I think that was key to the turnaround in Dallas.”

In a previous interview with Port Arthur Newsmedia, Johnson said he gave his all to coaching.

“I coached for about 40 years,” Johnson said. “As you know, for coaches, it’s a seven-day-a-week, 12-month-out-of-the-year job. I put so much into it for 40 years. At the end of the journey, being recognized is quite a thrill.”

“I had been jumping up and down on Jimmy deserving to be in the Hall of Fame for a while,” he said. “I wrote a column in 2004, when I thought Jimmy was snubbed. He hadn’t won a game since then or coached a game since then. What has changed? He went into the worst situation in football… Within five years, he won two Super Bowls. He was the NFL coach of the year in his second year.”

West said one of Johnson’s biggest attributes was his willingness to develop relationships with Black players.

“He wrote a book after he won his first Super Bowl,” West said. “He wrote about growing up in Port Arthur and playing with the Black friends he had in Port Arthur. Obviously, for a guy to be as successful as he was at that time you had to be able to relate to Black players and he did.”

Johnson and the rest of the 2020 class will be enshrined at the Tom Benson Hall of Fame Stadium at 6:30 p.m. today.

Previous reporting from I.C. Murrell is included in this story.