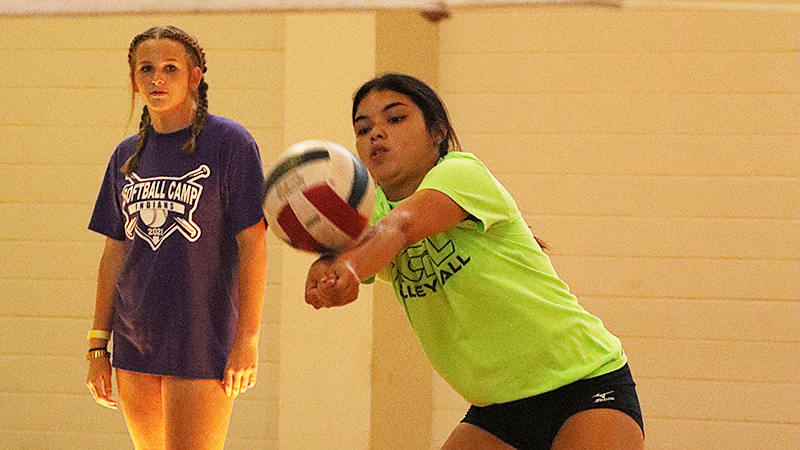 Mariela Dublon is one of four Port NEches-Groves seniors expected to lead the volleyball team this season. (Chris Moore/The News)

With all but two players returning, the coach is leaning on four seniors to lead a group still packed with underclassmen.

The UIL this season returned sporting events to status quo, meaning tournaments are back on the schedule.

“I think we are really thankful to have a preseason,” Fruge said. “We are excited to get that experience. You really need it… We missed it last year. It gives us a lot of chances to see the girls in different lineups and what they are capable of doing. It also gives the girls a chance to gain some confidence. They went into last season with one preseason game and then into the district.”

Hughes said she is ready for the tournaments to start.

“We had them our sophomore year, but missed them last year,” she said. “The tournaments make us so much stronger. We play so many games and get to see each other all of the time. It is very exciting to have them back.”

Fruge said the team has worked hard during the summer.

“We have good attendance during our strength and conditioning drills,” she said. “We did a lot of skills training in the summer. They are excited to get back with their team and compete.”

The Indians open the season Aug. 10 with a matchup against West Brook.

Fruge said the seniors have been instrumental to the team’s offseason success.

“That is a very strong group,” she said. “They are very good leaders. They can lead in a way where they can build friendships and not do it in a negative way. They show the younger ones what the expectations are.”

Dublon said she believes the team will continue to improve as the season goes on.

“I want us to lead and put them in a position to take over when we leave,” Dublon said of the underclassmen. “We want them to be treated fair and not feel like we have seniority. We want them to be comfortable around us.”

Dublon said she wants to have a deep playoff run.

Hughes believes the team has a bright season ahead.

“We are very confident and have great team chemistry,” she said. “We know how to build each other up and work together. This is our last season and we are ready to get it started.”

Coates said the year of experience together is the biggest difference from last year’s team.

“We were all pretty new to varsity,” she said. “Now, we are going to be a lot more put together.”