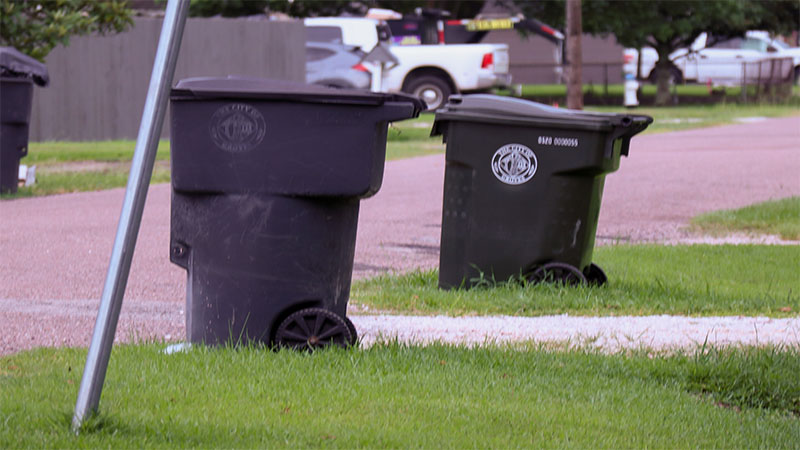 Groves leaders are deciding how to move forward with issues regarding garbage pickup. (Chris Moore/The News)

GROVES — Despite the city’s efforts to reduce the amount of garbage being picked up on routes, Groves council members are moving forward with plans to add another garbage truck in the future.

In June, the city voted to approve a raise in prices for residents with more than one garbage can. In an effort to try and discourage people from using more than one trash can, city officials elected to raise the deposit to $45 and raise the monthly cost from $10 to $15 starting July 1.

During a city council meeting Monday, City Manager D.E. Sosa said the city was looking into purchasing an additional truck by 2023. The time lapse allows the city to budget the cost of the truck over the next two years.

“We are not changing anything in the solid waste (budget),” Sosa said. “…We are going to order it and it will be delivered in the budget of 2023 and we will finish paying for it then. Instead of our rate payers having to pay a big chunk and going up on our rates, we are going to go ahead and put half of the money in equipment replacement and make sure it is delivered in October of 2023.”

Council members expressed concern over how fast the city might need the additional truck, citing the population rise and desire to not alter the garbage pickup days.

“We are going to need that truck before then,” Ward 3 Councilman Sidney Badon said.

Sosa said he is confident the city can handle the extra workload until the new truck arrives. He also said the truck would take 10 months to get to the city if it was ordered immediately.

“Right now, we are in the process of getting a handle on it,” Sosa said. “Our guys work five days a week and not four anymore. We can make adjustments, if we need to, in the route and the times…We may have to put a route on Friday.”

Borne said the city needs to stop “kicking the can down the road.”

While the city waits for the new truck, garbage collectors could use existing employees to work the Friday routes. The day is typically used for missed days and special assignments.

The city will further discuss the issue when the council members meet with department supervisors.