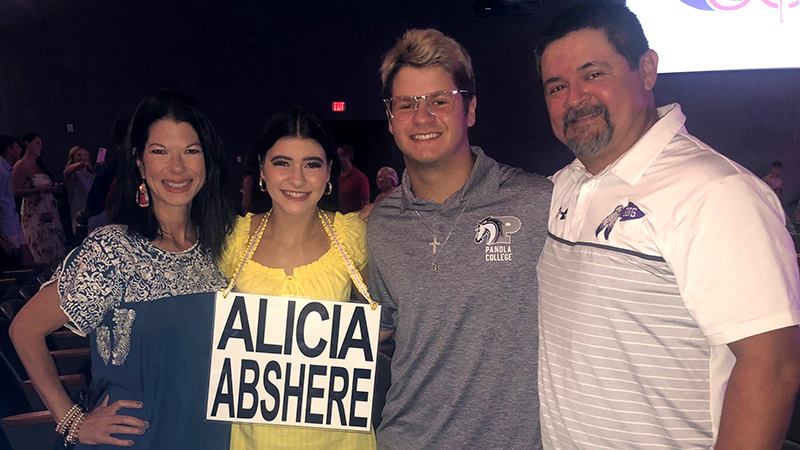 Ramona Guillory has always enjoyed seeing her granddaughter’s face, but as she waited outside of the building where Alicia Abshere participated in a weeklong tryout for the Kilgore College Rangerettes, not seeing her was a good sign.

Guillory was familiar with the process as she was a Rangerette on the 33rd line in the 70s.

“The girls go in first and the family cannot go in,” Guillory said. “The directors talk to them, thank them and tell them that only some will be chosen.”

At the beginning of tryouts, each participant is given a number. Abshere was assigned 65 out of 71. Per tradition, the announcement is made with a “sign drop,” which reveals the numbers of those selected to the squad.

“The saddest part, as we are sitting outside, we are seeing girls come out that didn’t make the team,” Guillory said. “We are looking for Alicia, but we aren’t looking for her. We don’t want her to come out right then. All of the sudden, we go in the building and we still don’t see her. Then, she pops out on stage from all of the girls that are up there and we just broke.” 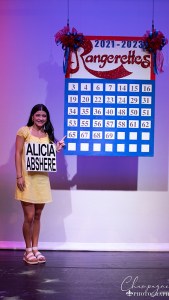 Alicia Abshere stands next to her number, 65, on the sign that revealed she made the Rangerettes. Courtesy photo

The Rangerettes are known worldwide, and Guillory was part of the first team that traveled outside of the country.

The lead up to the tryouts was filled with preparation, Abshere said.

“The week before, they sent us videos for us to learn,” she said. “That way, we would already know the routines and be ready for the tryout process for the judges. We learned four routines over video. We showed up and they split us up.”

In addition to the video routines, those trying out learned an on-the-spot routine that was performed for the directors moments after learning it.

“The following day, we did the whole process again and I had a solo,” she said. “We had to bring our own solo that suited you best with whatever type of dancing.” 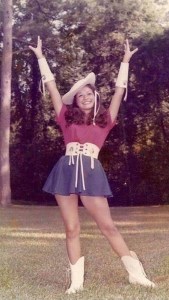 Alicia Abshere’s grandmother Ramona Guillory was on the Rangerettes 33rd line in the 70s. Courtesy photo

Abshere joined drill team for the first time in her sophomore year at Port Neches-Groves, but she was in dance classes since she was 3. She  had not really considered following in her grandmother’s footsteps until Guillory took her to a Revels Show one spring.

“In middle school and high school, I was really into athletics,” she said. “I have always stayed in studio dance but I didn’t think about trying out. My (grandmother) took me to my first Revels my sophomore year. That was right before drill team tryouts and I went in just wanting to watch a great performance and I left wanting to be on that stage one day.”

The rest of the tryout week culminated with a fun night prior to the big reveal.

Abshere said she waited to see if her number was on the sign.

“It is a few seconds, but it is a life-changing few seconds of your life,” she said. “It was a lot. It felt long, but today it felt like it happened in the blink of an eye. I will never forget that feeling. When I saw my number, I wasn’t sure that I actually saw it…As soon as it dropped, I had to do like three double takes to make sure I saw 65 on there.”

Guillory said the program has changed quite a bit since she was there.

“The directors believe in motivating,” she said. “The initiation has changed. Now, it is built on being mentors and being positive…I am excited for her to be a part of this and get the life skills she will carry with her forever.” 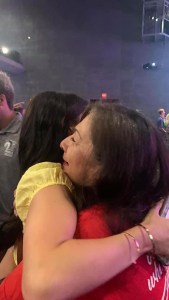 Alicia Abshere, left and her grandmother Ramona Guillory hug after finding out Abshere was selected as a Rangerette. Courtesy photo

Former Rangerettes (Forevers) are given the option to be mentors for incoming freshmen. Guillory said people have asked is she will “adopt” Abshere.

“I am already her forever grandmother,” she said. “I want her to get the experience from other Rangerettes so they can share their experiences with her. She already knows me. I am very excited for her to go do this…I think we are all still up there in; it is above Cloud Nine.”

Showoffs are Aug. 20, where the freshmen will be introduced and preform two dances and she will wear her uniform for the first time in Kilgore College’s first game against Tyler Junior College Sept. 4. The Rangers’ first home game is Sept. 11.