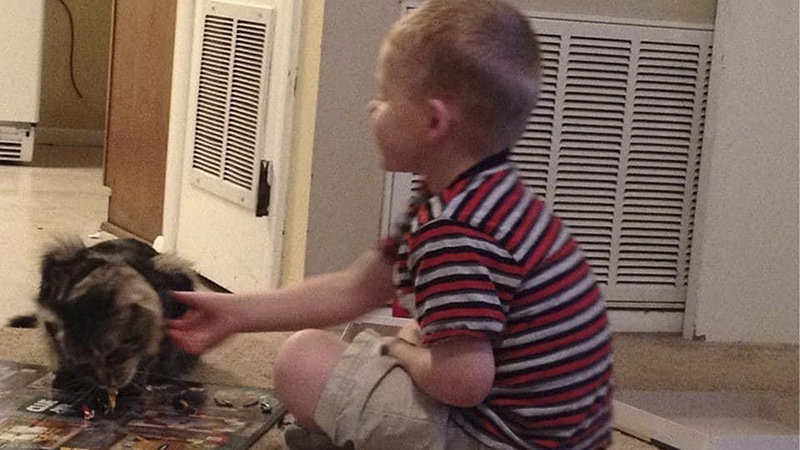 I’ve never really had a pet of my own. I remember there being dogs in my childhood, but they never seemed to be with us long — usually because we moved and they were rehomed.

That changed when we got Lucy in 2009. Granted, she’s not the point of this story, but the way it began.

We adopted Lucy as our first family pet. The 6-week-old kitten and her tiny siblings had been abandoned on a friend’s porch. We tried as hard as we could, but she was feral and, quite frankly, didn’t like any of us. But one day she got out of the house, and not long after she had a litter of kittens under my child’s bed before running away a few months later.

I immediately took to a tiny little guy that was solid black with white stripes across his stomach. He was constantly getting into mischief, making his personality known. And when it came time to find homes for the six babies, I couldn’t let him go.

Simon became my first real pet. What eventually became a 20-pound Main Coon acted as if he were one of the kids. He didn’t know he was a cat. And to be honest, we often forgot too.

When he was born on May 27, 2010, my youngest son was not yet 3 years old. The two of them grew up together, best friends from the beginning. I remember he and I arguing once about who would keep Simon when he went off to college. I didn’t have the heart then to tell him that Simon likely wouldn’t live that long. My kids had never experienced the death of a pet before. It’s not something we talked about.

At nights when I would take a bath, Simon would sit on the side of the tub and play with the bubbles. Occasionally he even sang with me.

When my youngest son wanted to play a board game and none of his siblings did, Simon would sit on the floor with him and push game pieces around the board. Neither knew what they were doing, so it was as real as it could be.

For the most part he just lounged around the house, climbing in laps, napping most of the time. But if you were sick or sad, he was the first to snuggle his furry face across your cheek and give his version of kisses.

He slept next to me at night, nose-to-nose, with his paws wrapped around my arm.

A few months ago he became sick, drastically losing weight and having difficulty moving. He was diagnosed as diabetic, but even after that he wasn’t the same. Any time of day I would find him laying on the kitchen table without the energy to move. He fed less, drank less water and ultimately only moved when he needed to.

When we walked in the door Friday afternoon, it was obvious something was very different. Simon was laying on the floor and couldn’t find the energy to stand up. I checked on him often, praying he was just dealing with a temporary illness. It had happened before; surely it could happen again. But just in case I told my kids to hug him, kiss him and say their goodbyes. They had watched his health fail and knew it was only a matter of time.

By Saturday morning, he was worse. So at 11 a.m. I picked him up and laid him in bed next to me to watch a movie. Around noon, he began making noises I hadn’t heard before. So I gathered him in my arms, lips to his head, whispered over and over again that I loved him and held him for hours until he passed away.

My sweet boy, the four-legged love of my life, left us at 3 p.m. Saturday. My youngest son took it hard; but now almost 14, held himself much better than I expected. I, on the other hand, am still struggling when I walk in a room and expect to see what was once a 20-pound teddy bear, or notice the food bowl he’s not at.

He was buried with photos of us so he knows how much we love him, and he’ll never be alone.