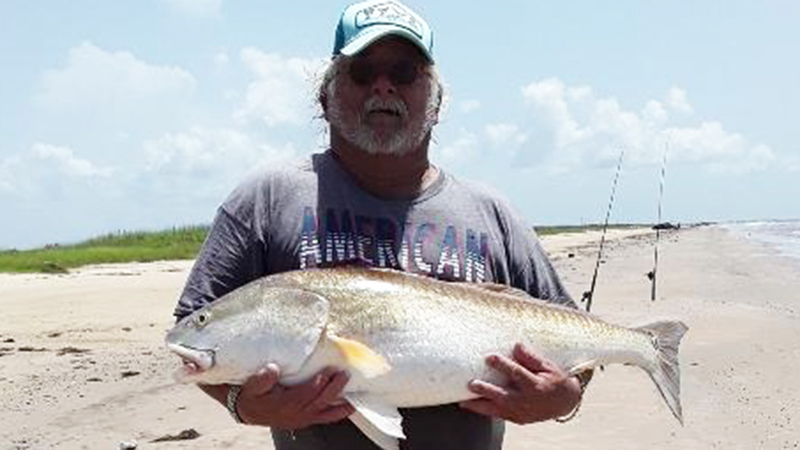 Rolando Caballero, of Port Arthur, drowned trying to save another man at Keith Lake on Wednesday. The photo shows him with one of his catches. (Courtesy photo)

A Port Arthur woman was fishing with her husband Wednesday morning when he died trying to save another man from drowning.

Norma Diaz and Rolando Caballero went early to Keith Lake on Texas 87 between Port Arthur and Sabine Pass. Their “fishing buddy” at the lake that day, identified by police as Halil Cakmaktas of Beaumont, was quiet and very cordial, Diaz said. When Diaz was unable to catch any bait with the cast net, she moved to another area nearby and started crabbing.

At some point the Beaumont man fell off the small revetment and into the lake. The area has a strong current.

Diaz and her husband always keep a long rope with them on their fishing trips, she said, so Caballero tried to toss the rope to the other man without success.

Another man at the scene tried to toss a long cast net to the drowning man but it also failed.

“So my husband went in and tried to get to him,” she said.

She said she offered to go in but her husband refused to let her.

“He said, ‘You can’t go in,’” she said. “He always told me, ‘If something happens do not come in and get me because the currents are bad.’”

Diaz was there when the men were pulled from the water. She commended the first responders for their life-saving efforts including a constable that, she said, stepped up and performed CPR on Caballero, 63. The Port Arthur man would have turned 64 on Aug. 12 and the couple had plans to spend it at the Gulf of Mexico.

“He was my rock and I was his bigger rock,” Diaz said of her common law husband of 13 years. “We stuck together 24/7, whether it was good or bad. My glue has come undone and I don’t know what I’m going to do.”

Information about Cakmaktas’s age or next of kin was not available as of Thursday morning.