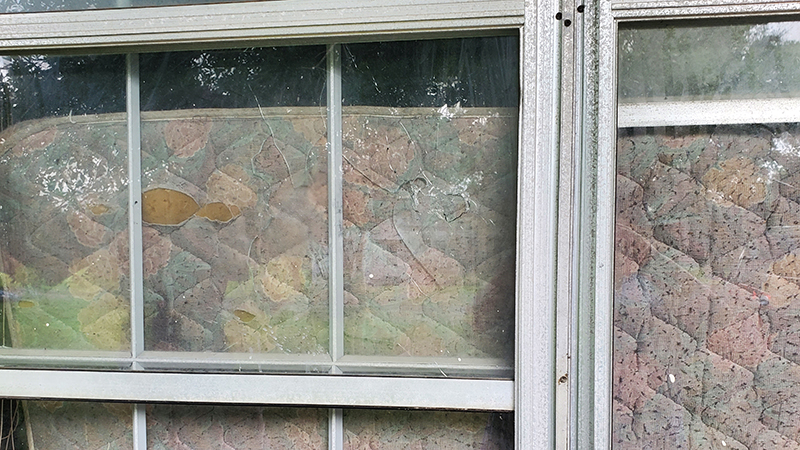 A mattress is laid up against a window that was damaged during a shooting Friday evening in Port Arthur. (Mary Meaux/The News)

A group of young men were playing basketball outside a home on Evergreen Drive as a toddler played nearby when two men walked up to the yard and opened fire Friday evening, Port Arthur Police Chief Tim Duriso said.

The shooting left a 1-year-old boy with a gunshot wound.

Duriso said two assailants each had guns but doesn’t know if both fired their weapons.

Investigators are following leads in the case, he said adding he had not received an update late Monday morning on details such as caliber of weapons used or how many shots were fired because the detectives were out investigating.

The male toddler victim is listed in good condition and is expected to recover, Duriso said.

Monday morning a small pool of blood was still visible, dried and dark, on the driveway a few feet from the house in the 2100 block of Evergreen Drive.

Drops of blood led to the front door, showing the path the toddler took as he went for help.

A male relative visiting Monday pointed out the blood and the path as he described the scene, saying the child was strong.

The bullet, he said, struck the child in the leg.

Port Arthur Police were called at approximately 7:35 p.m. Friday to the house for the shooting. The toddler was brought to a local hospital for medical treatment and later sent by medical helicopter to a hospital in Houston.

Duriso said the vehicle has not been located as of Monday afternoon and that police are going to speak with neighbors and make them aware of the possible suspect description.

When asked about his thoughts on there being a 1-year-old gunshot victim, Duriso asked for people to put their guns down, talk it out, stop the violence and come together.

PAPD is also investigating a second shooting that took place Friday evening at a home in the 3100 block of 18th Street. Police said the home was struck multiple times.

There were people at home at the time of the shooting but no one was injured.

Since the case is being actively investigated, Duriso did not have information readily available about the weapons or suspect and vehicle descriptions.

The police chief investigators do not know a motive for the shootings at this time and detectives are looking into it.

Duriso said he hopes there is no more violence associated with these two shootings. Police are speaking with people involved to see if there is any talk of more shootings.

Persons with information about this crime can call Crime Stoppers of Southeast Texas at 409-833-TIPS. You won’t be asked your name and you may be eligible for a cash reward. You can also make an anonymous tip to Crime Stoppers by downloading the P3 Tips app on your smartphone.