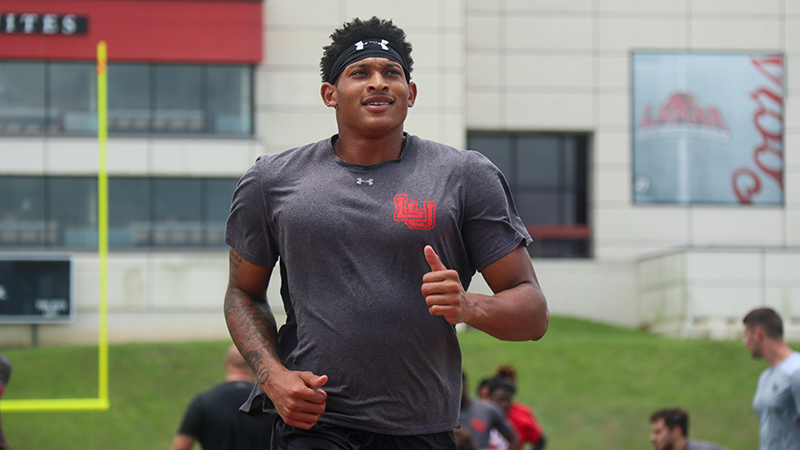 BEAUMONT — Coming off a shortened spring season, Lamar quarterback Jalen Dummett is focused on improving as the Cardinals head into their first season in the Western Athletic Conference.

In their final season in the Southland Conference, the football team played in the spring giving them less time to recover for the next season set to begin in the fall.

Dummett, who is entering his senior season, said he is looking forward to the challenge and of the crammed schedule and new conference opponents.

“You have to take care of your body a lot more now,” he said. “We played six games last season and those were tough games in the Southland. We just have to get back to that right mindset. We have some more games to play.”

The team is in the strength and conditioning part of its offseason program, but the quarterback is already working on leadership skills.

“I’m really laid back,” Dummett said. “I just get out there and handle my stuff and when it is time to play I am ready. I bring a lot of energy and I am going to try to bring a lot better play from the quarterback position.”

The dual-threat QB made his presence known on the ground and through the air last season, but Lamar Head Coach Blane Morgan said he has been impressed with Dummett’s improvement with his passing.

“He really loves football,” Morgan said of his quarterback. “That shows on a daily basis. To me, I saw it last spring with the improvement he made from Week 1 to the fifth week in the season. He improved every single week. He brings a dynamic aspect. He certainly has adapted to our style of offense.”

The quarterback said he wanted to improve to provide a valuable threat for opposing defenses.

“Before, teams thought we were just one-dimensional and ran the ball all the time,” Dummett said. “Now, we have more to put on the table. We can do more and put it in the air.”

Morgan said Dummett has had to learn on the fly given that his first start for the Cardinals came in a condensed spring season.

“He is starting to get it a little bit better,” Morgan said. “From week to week, you make adjustments with the offense and that takes time. Being in a new offense and learning new defenses every week, those are the toughest things to really grasp.”

The head coach said Dummett’s work ethic is what separates him from others.

“He likes to work hard,” Morgan said. “When you work hard, then comes success and that is where you have fun as a result of that. That is what he has learned to do first and foremost. You come to the field house every day and put in work and the time, the results come.”