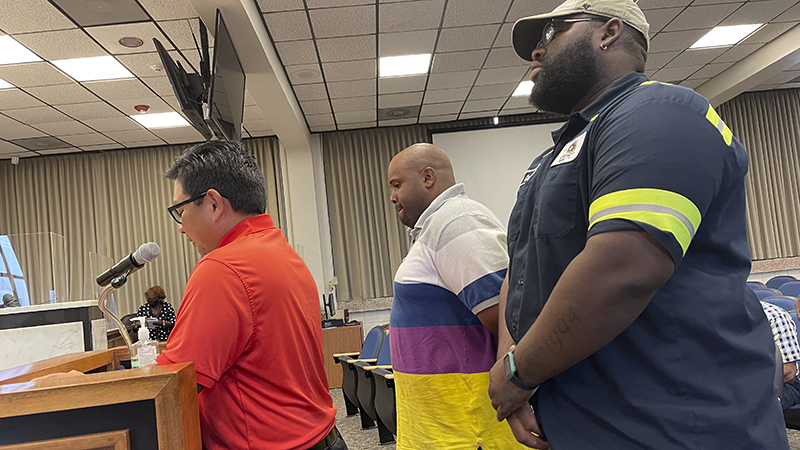 Alberto Elefano, director of public works, addresses the council. Standing behind him are Leslie Perkins, to his right, and Caanan Scott. (Monique Batson/The News)

Like any other day, Port Arthur Solid Waste employees Leslie Perkins and Caanan Scott were collecting trash on the morning of June 30.

But within hours, they had not only served the city, but literally saved members of it.

The two were in the 2300 block of Norma Street at approximately 9:14 a.m. when they noticed a house on fire.

“Leslie and Caanan went over to the house and realized that there were people inside the burning house,” said Alberto Elefano, director of public works, while speaking to members of the city council Tuesday evening. “With disregard to their well-being, they went inside the burning house and saved a woman and two children and a dog. Through (their) rapid response and bravery, lives were saved.”

Perkins and Scott stood with Elefano and their direct supervisor Glen White. But their response to the recognition was more than humble.

“I’m not gonna lie to y’all, I really thought we were going to get in trouble,” Perkins said with a laugh. “(White) always says, ‘We need you where we need you.’ When I saw them, I just couldn’t stop. And definitely when I saw those kids — I have children of my own.”

Perkins said he and Scott were the first to arrive on scene.

But Councilman Thomas Kinlaw was quick to let them know that they were where they were needed.

“That family that you saved and those kids,” he said. “That family wouldn’t be here today without you guys. And I just want to say thank you personally for being there. You were at the right place at the right time, you just didn’t know it.”

Mayor Thurman Bartie said he had received calls from residents regarding the bravery of the two solid waste employees.

“I want to express the sentiment of the council — my colleagues and the citizens of Port Arthur thank you all,” he said.

Charlotte Moses: “I really, really thank God for you and for your attentiveness, and how you were able to see and notice things around you. We really appreciate not only that you do the job that you do, but to go beyond the call of duty is absolutely amazing.”

Donald Frank: “No greater love hath any man than this than to lay down his life for a friend. You put it on the line. Thank you.”

Cal Jones: “Your dedication, love for the city and for the citizens — thank you.”

Ingrid Holmes: “I can’t say thank you enough for what you do, not every day but in this particular occasion. It’s amazing and I just appreciate everything you do overall.”

Port Arthur Battalion Chief Patrick Murphy said the day following the fire that it originated from the back of the house and flames were visible by the time firefighters arrived on scene.

There were no reported injuries.

Port Arthur tourism could soon be flying high with…