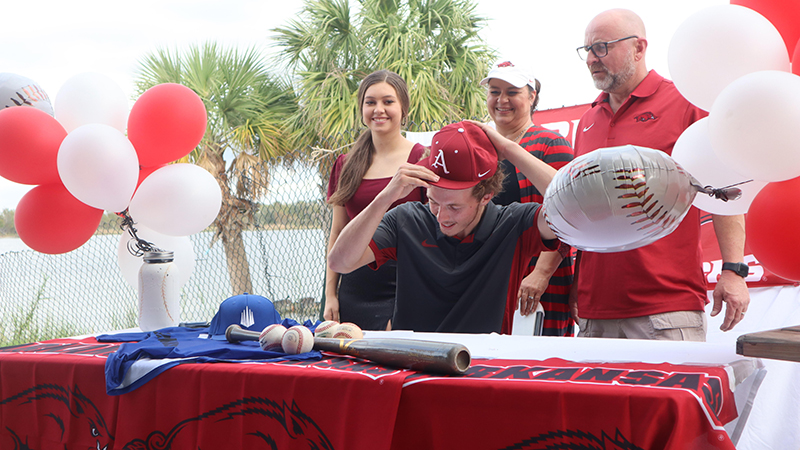 Port Neches native Drake Varnado, surrounded by his family, chooses the University of Arkansas as his destination to play college baseball during an event in 2020.

Heading into the Major League Baseball draft, former Port Neches-Groves baseball player Drake Varnado set his price to join the pros. If a professional team did not meet that price, he would play out his college career at the University of Arkansas.

On Tuesday, the Arizona Diamondbacks drafted Varnado in the 17th round, but the shortstop said he will continue to play college ball in the SEC.

“Some teams made some offers and they were close to getting me and my family to where I am comfortable going out and playing pro ball,” Varnado said. “Ultimately, everyone wants to play ball and be a big leaguer, but it was just where they were at. They were close, but education is important to me. It is hard to pass up coming to play in Fayetteville.”

Varnado will have to wait until after his third year of college baseball to be draft eligible again. The shortstop said he would’ve been able to enter the draft again next year had he attended a junior college.

Varnado said he always wanted a funny draft story and was able to get one this week.

“I had Atlanta that was in for an overpay in the 11th round and they couldn’t get to where I was at,” he said. “I turned the TV off and went with my dad to see the recruiting coordinator and hitting coach at Arkansas. We were talking and he had it pulled up on the screen. He looked at me and said ‘Congratulations, you got selected by the Diamondbacks.’”

The ex-PNG player said he is still open to playing in the pros if the Diamondbacks can reach his number.

“They told me they wouldn’t have drafted me if they didn’t like me and thought they had a possibility to save enough money with their first 10 picks to reach my number,” he said. “I am staying optimistic about it, but at the end of the day, if it is not there, I am excited to be a Razorback.”

Varnado signed with the Razorbacks last year during his senior season at IMG Academy in Florida. He played his freshman season at PNG before transferring to Kelly in Beaumont for his sophomore season.

PNG Coach Scott Carter said Varnado was one of the most talented freshmen he had ever seen.

“He was the first kid in the history of my coaching to come into my program to throw 90 across the infield as a freshman,” Carter said. “His ceiling is really high. Being drafted at the point he was drafted and going to Arkansas, he was in a win-win situation…He would either get drafted and make life-changing money or go to the SEC. I am glad to see he is going to continue his education at Arkansas.”

Varnado enrolled at Arkansas two weeks ago and is taking Theater Appreciation as he gets acclimated to the campus.

“I have that class every day from 11 to 12:30,” he said. “Right now, no coaches are allowed to work with us. I have three roommates and they are all pitchers. We have been getting our work in everyday.”