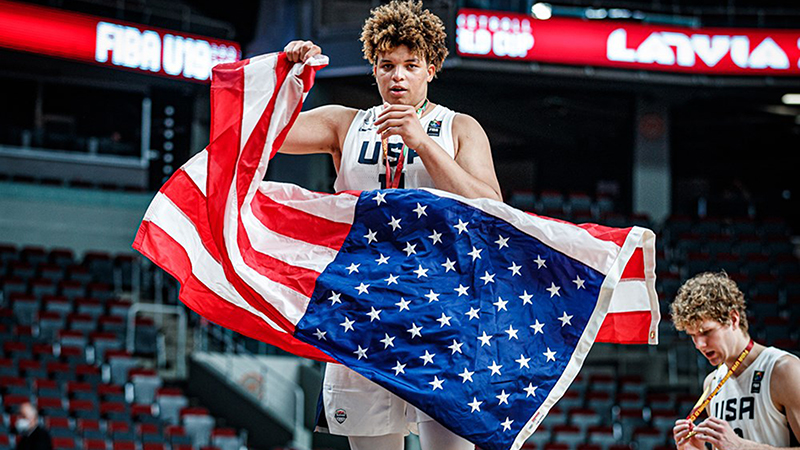 For those who thought Kenneth Lofton Jr.’s freshman year could not get any better, the Memorial grad is coming home from Riga, Latvia, with a gold medal and more notoriety.

Twitter was abuzz during USA’s 83-81 come-from-behind victory over France Sunday. Lofton scored a team-high 16 points (15 in the second half) to go along with seven rebounds, two assists and one steal.

See the pictures. Lofton was a community favorite in his city hall return this week.

Several members of basketball twitter weighed in on their love for Lofton’s game.

“France has the best prospect in the world. USA has Chet Holmgren. Yet, one man, our thick gawd is dominating down the stretch. Buckets and steals. Long live Kenneth Lofton Jr.”

“There are at least three and possibly four future top-five NBA draft picks playing in this game, but all I want to do is clip Kenny Lofton Jr. post moves.”

“Lofton is working everybody in the post. Chuck Hayes 2.0.” 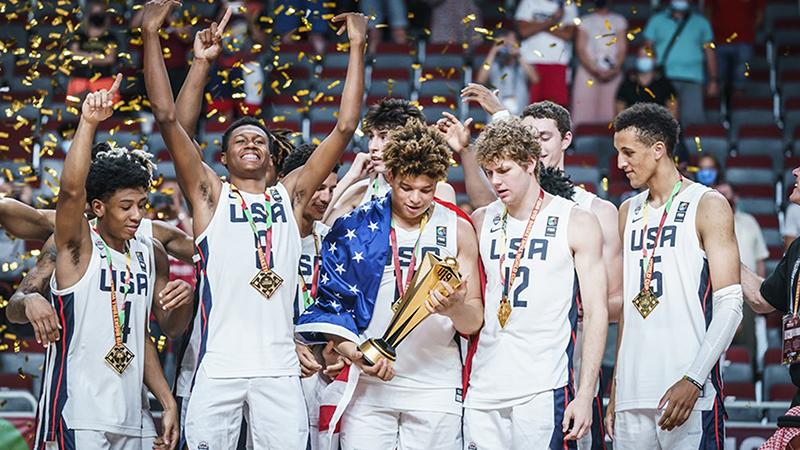 USA defeated France 83-81 in the FIBA U19 Championship game Sunday. Courtesy of FIBA

“Phenomenal FIBA U19 World Cup for Louisiana Tech’s Kenneth Lofton. Unstoppable force with his back to the basket, a magnet for fouls, and a killer on the offensive glass. Glue of the team personality and chemistry wise. Going to become one of the faces of college basketball.”

Lofton was limited in the first half, taking just one shot attempt while recording only one point.

As the red and blue faced a 42-37 deficit at the break, they came out of the locker room and started to play through the post more.

Enter the Conference USA Freshman of the Year (and his massive bag of low-post moves).

He scored the first two buckets for USA in the third quarter.

Down their largest deficit at 58-50 with 2:20 to play in the stanza, Junior powered his way for two more field goals and assisted on a triple to tie things up at 59-59.

France would not back down though, going on a mini 5-0 run to go into the fourth and final quarter with a five-point edge.

Playing almost the entire final 10 minutes of the game, Junior got even stronger.

The Port Arthur native recorded seven points and three rebounds in the last stanza to spark the USA’s comeback.

His biggest bucket was his team-leading seventh made FG, which came with 2:10 to go as the USA pushed its lead out to 81-76.

His biggest defensive play came on the next possession as he picked the pocket of France’s point guard on the perimeter, which led to a fastbreak dunk.

And his biggest rebound came at the very end as he outhustled everyone for the offensive rebound to not allow the opponent to have a potential game-winning shot, securing the two-point victory and the gold.

He also was only the third USA player in FIBA U19 World Cup history to average 13, points, five rebounds and shoot at least 60 percent from the field. The Bulldog scored at least 14 points in five out of seven games in the tournament. The rest of Team USA players did it nine times combined. His 16 points in each of the final two games were team highs.