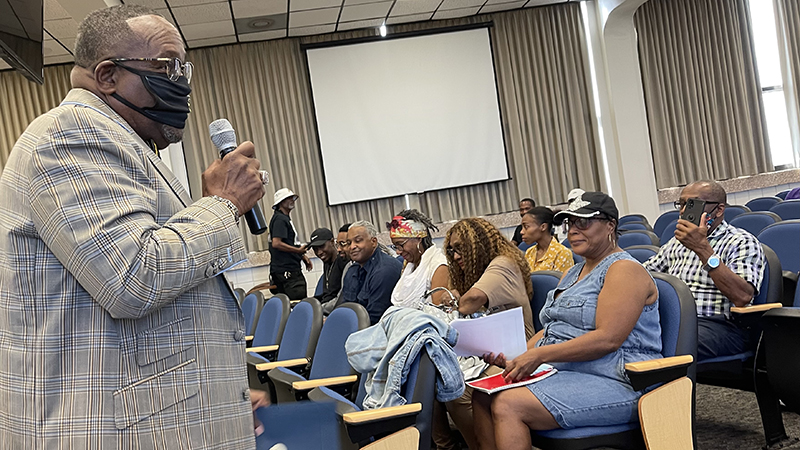 The fifth floor of Port Arthur City Hall was full of smiles, hugs and greetings Tuesday as the City Council resumed in-person meetings for the first time since the pandemic shut-downs.

“We are here at this historic meeting because we haven’t met together in 15 months,” said Mayor Thurman Bartie. “We have three new council members who have never had the opportunity to be in chambers because of COVID.”

District 1 Councilwoman Ingrid Holmes, District 8 Councilman and newly-appointed Mayor Pro Tem Donald Frank and District 4 Councilman Kenneth Marks were elected to the board after meetings were moved to a virtual-only format in April 2020.

July 13, 2021, was proclaimed as Kenneth Lofton Jr. Day in the city. The athlete’s family and friends were in attendance.

The basketball star thanked the crowd for the proclamation and support, committing to continue being the best athlete he can.

Click through here to see photos from Lofton’s special say. 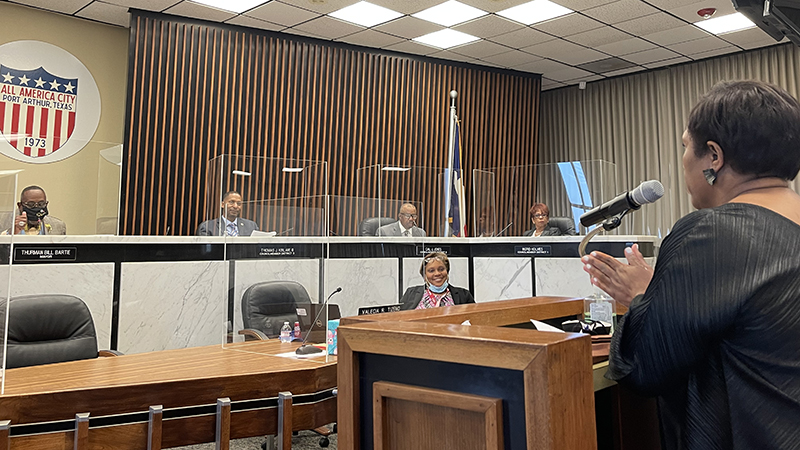 Karen Kennard address the council during the city’s first in-person meeting. Plexiglas shields have been added around council members and city staff to help protect against COVID. (Monique Batson/The News)

Other agenda items included a request to designate Port Arthur as “Bird City,” a resolution to change the operating hours of the Port Arthur Public Library, and the appointment of a new fire chief, among other issues.

Council members decided in late April to return Tuesday to in-person meetings in order to allow for COVID-related provisions to be added to the chambers.

Those present at the meeting were greeted by Plexiglas shields surrounding each councilmember and member of city staff.

City Secretary Sherri Bellard in April presented a report showing the addition of the 32” to 36” Plexiglas shields would cost $8,900.45, along with $1,381 per meeting for sanitation following adjournment.

Meetings still are live-streamed on the city’s website, where they are archived and viewable long after the meeting date. However, there is a 3-5 minute delay.

When deciding to reopen meetings in April, Councilman Thomas Kinlaw III said, “If someone wants to come and speak before the council — for your safety and our safety — you have to wear a mask for the 3-5 minutes you’re speaking before the council, then you can leave. We’re not trying to take anyone’s liberties away from them.”

Agendas, dates and other information from future and past council meetings can be found on the city’s website.