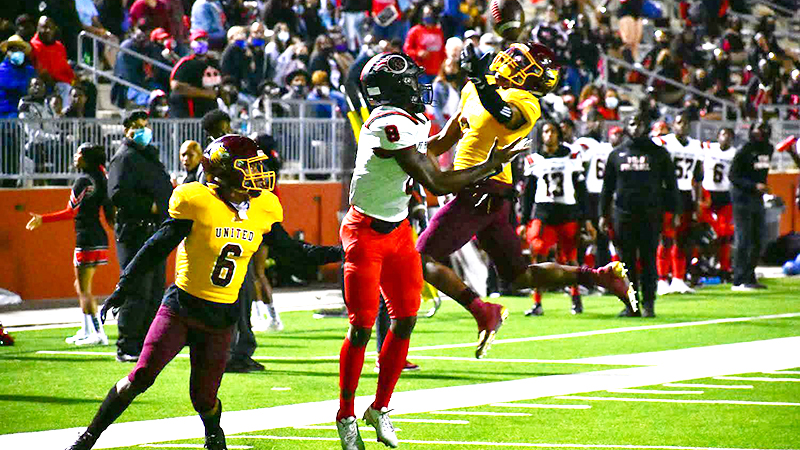 BEAUMONT — Beaumont United’s Chandler Rivers had quite the eventful year. In March, he was on the basketball team that won the State Championship and committed in April to play defensive back for the University of Duke.

For this upcoming football season, Rivers hopes to bring that championship mentality to the football field, where he earned the Multi-Purpose Player of the Year honor for District 9-5A Division I.

The corner back/returner/receiver picked of four passes last season, including two in the Timberwolves’ game against Friendswood.

“It took a lot of weight off my shoulders,” Rivers said of his decision to commit to Duke. “I knew it was the right decision for me, personally, for what I want to do in life. The academics is what got me. The athletic side is good, too. They take care of their athletes. I’ll still have a chance to go to the NFL. This past year, they put five players in the first four rounds of the draft. Two of them were DBs.”

Rivers said he wants to major in business management.

The multi-sport athlete said winning a state title in basketball this spring has motivated him to bring the same energy to the football team.

“It showed me a lot,” Rivers said. “The grind was real. There was no messing around. When they stepped on the court, it was all business. You have to know how to turn it on and off. Most of these guys (on the football team) are young, too. It is going to take a while, but it is going to happen.”

“It is an asset,” Graham said of Rivers’ ability to play multiple sports. “For him to leave here and then go play on the basketball team at his height is impressive. He gave them some quality minutes in that championship run. That says a lot.”

Graham said some bigger college football programs overlooked Rivers because of his height. Rivers is listed at 5’10.”

“If he was 6’1”, all of the big schools would have him,” Graham said. “When people call me, I tell them that he is special. You can’t coach competitive spirit. Everywhere he goes he is a winner.”

The coach said Rivers’ attitude is what sets him apart from his peers.

“He has a tremendous work ethic,” Graham said. “He has a competitive spirit that most of the top guys I’ve coached have. They don’t like to lose at anything. He has a quiet confidence that does rub off on some of our kids.”