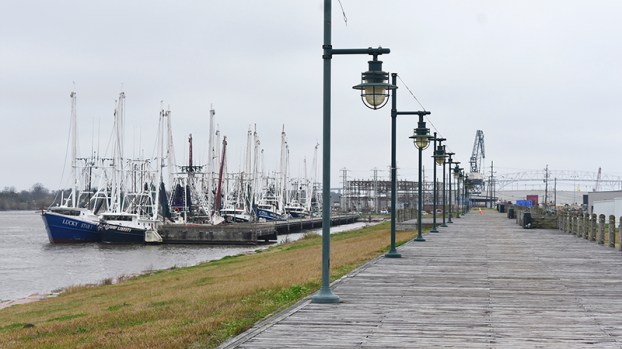 The view from the Port Arthur seawall shows shrimp boats at dock. Texas and federal waters are slated to open for commercial shrimping at 30 minutes past sunset Thursday. (Mary Meaux/The News file photo)

Port Arthur area shrimpers are facing an uncertain future even with the opening this week of the Gulf of Mexico commercial shrimp season for state and federal waters.

Texas and federal waters are slated to open for commercial shrimping at 30 minutes past sunset Thursday.

Port Arthur Area Shrimpers Association Vice President Kim Tran, who also works as a translator, said local shrimpers often come to her to talk and their stories over the past two years are all “very hard.”

The shrimpers who are left, Tran said, are feeling frustrated and also worried about clogging seaweed and pesky sharks, which are eating up nets.

She said her job puts her in contact with shrimpers on a daily basis, adding those she speaks with are looking forward to this season.

“I have heard the shrimping is very good this year,” Fitzgerald told Port Arthur Newsmedia this week. “They have been currently shrimping off the Louisiana coast and when the Texas coasts opens up, I know that it is going to be full blast.”

In order to help the local shrimping industry, Fitzgerald said consumers must be aware when they go into grocery stores and looking for where their food originates.

“If they are in the frozen section, actually look on the back of the packaging to see if it’s gulf shrimp or American shrimp,” she said. “A lot of the packaging is deceiving. You are actually buying shrimp from foreign countries. Buying locally sourced shrimp would help the industry tremendously. Our gulf shrimp are some of the best shrimp in the United States. You can’t beat it.”

Biologists evaluate the biological, social and economic impact when deciding the opening date to maximize the benefits to the industry and the public.

In making its determination, the Texas Parks and Wildlife Department’s Coastal Fisheries Division used the best available data from samples collected during routine trawls and bag seines in June.

“The annual mid-May closure protects brown shrimp until they can reach larger, more valuable sizes during their major period of emigration from the bays to the Gulf of Mexico,” Coastal Fisheries Division Director Robin Riechers said.

“The closure also helped to prevent the waste caused by the discarding of smaller individual shrimp.”

Federal waters (from 9 to 200 nautical miles offshore) will open at the same time state waters open.